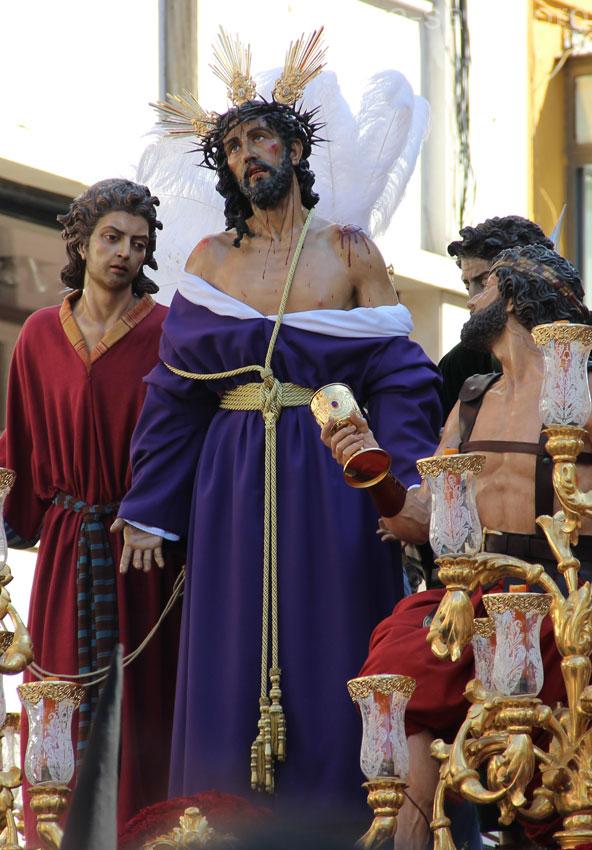 Humble and Fervent Brotherhood and Brotherhood of Nazarenes of Our Father Jesus stripped of his garments, Our Lady of Sorrows and Mercy, Suffering of Our Lady, St. John the Evangelist and St. Bartholomew the Apostle

Chapel of Suffering(Plaza de Molviedro) – 2 Steps (Jesus stripped of his garments and Maria Stma. Of Sorrows and Mercy)

Social work: Facilitate places in the asylum of the Foundation Doña María.  The bell “Molviedro Solidario” brings food to the Food Bank.

OBSERVATIONS: One of the main attractions of this pallium passage the Virgin and San Juan are listed in reverse position to the usual, because according to the original project, It should also contain a Magdalena. They are remarkable embroidery and gold reliquary with a relic of Blessed Mother Genoveva Torres, foundress of the Sisters Angélicas, the Residence Tartessos. In the first step shown when the Lord removed the robe and the draw lots. The Lord was carved by Antonio Perea Sanchez while serving a sentence in the provincial prison for sympathizing with Republicans.

HISTORICAL FACTS: It was founded in the parish of San Marcos in 1936  his first rules are 1938. Then he resided in San Julian and San Bartolomé. D. José Laborde was his driver and a group of faithful. It is installed in its current chapel 1982, following a loaded history of difficulties.

RECOMMENDED PLACE: The Gamazo street and around. Campana with “Soul of God”. his departure, with “Nazareno and Gitano” and input. Input and output are of the hardest Easter.