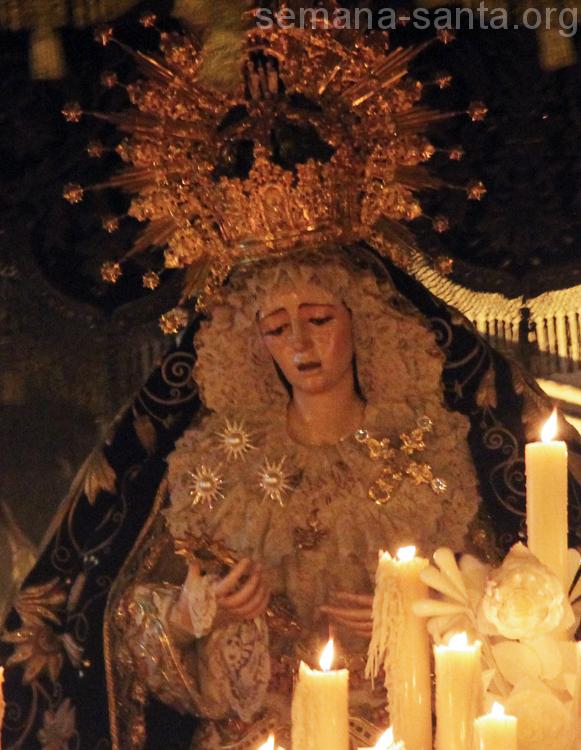 Pontifical Real, Illustrious and Fervent Sacramental Brotherhood and Brotherhood of Nazarenes of Our Father Jesus of Sorrows and the Virgin of the Star, Triumph of Santo Lignum Crucis, San Francisco de Paula, and Santas Justa and Rufina.

IMAGES: The Lord of Sorrows is José de Arce (1655) The Mystery Castle did Lastrucci (1952). The image of the Virgin is attributed to the workshop Roldana (XVII century) although others consider it as anonymous.

embroidery: This year (2016) takes the pall of Antonio Garduno embroidered by Fernandez and Enríquez (1955) and mantle of Consolation Sánchez (1873).

COATS: white, layer, with purple velvet mask in Christ and the Virgin Blue.

MUSIC: In Cross Guide,A.M. Mary of Sorrows Crowned,  Presentation to the People of Dos Hermanas in the Mystery and Virgen de la Oliva de Salteras with Virgin.

Social work: Since June he has delivered 13 tons of food and works directly with the association of transplanted coasting the floor of the family accompanying.

Premieres 2022: The brotherhood will leave the chapel after some works that have been extended since May 2019 until March 2021. The temple has gained a ship, where the altar of the Lord of Sorrows is located.

Premieres 2018: Set of six ciriales for the procession of the Lord of Sorrows made by the goldsmith Ramón León as designed by Sergio Cornejo. Each cirial has a bandstand with a picture of Angel Mancebo inside carrying some attribute of the Passion related to the passage of mystery. The sculptures have been carved by Encarnación Hurtado. Incorporate a new logo: inspired by the original staff of San Francisco de Paula, head of the brotherhood, carrying a relic of his. It has been designed by Sergio Cornejo and made of mahogany and
silver by the silversmith Bernet

Premieres 2017: Four censers in sterling silver repousse for the passage of Holy Mary Star of the work of Ramón León under design Sergio Cornejo Ortiz and four embroidered in gold on purple velvet dalmatics (of, for the passage of Christ) and blue (other two, for the pallium) Embroidery workshop works Nuestra Señora del Carmen (San Fernando, Cádiz).

OBSERVATIONS:this brotherhood, which opens the Easter in Triana, It is the one that has the largest number of Palm Sunday Nazarenes. At the front it is an image of the Caridad del Cobre, patroness of Cuba. It is known as the Valiant because it was the only guild that came in Easter 1932, during the Republic. In step Mystery dice with which raffled appear tunic of the Lord. Only guild with two palliums.

REMARKABLE SITES: His return to Triana, where thousands of people gather to acomparla from the bridge. Baratillo. Try to see the Lord of Sorrows back when illuminated only by its Candelería, spectacular. Star down the bridge and into the Center for Catholic Monarchs.

HISTORICAL FACTS: Founded in 1560 in the former convent of Victoria, by seafarers and related cowling boat. In 1674 when it fused with the Fellowship of Las Penas. In 1976 he moved to its current location from the Church of San Jacinto.

Premieres 2015: the robe that goes in step at the feet of Christ made from embroidered seventeenth century by Luis Miguel Garduño opens. the tradition of wearing the embroidered tunic recovers.

PREMIERES 2014: Take first the script of John Paul II “Radiant Star of the Third Millennium” embroidery workshop Luis Garduño. Juan Borrero has made the poles of both steps and the Knight brothers New parihuela Mystery. The Brotherhood has just created a Escolanía with younger brothers. This year takes the pall of Garduño.

PREMIERES 2013: Restoration candelería the pallium in Orfebreria Son of Juan Fernandez. The Palermos sterling silver that have relizado for band members, by the goldsmith Juan Borrero de Triana. This year the Star retrieves the pallium de Ojeda. The work of Juan Manuel Rodriguez Ojeda made for the Macarena in 1891 He saturated in 1909 the Star. Embroidered in gold on black velvet fine, while, when the Brotherhood is made in property that is transferred to palio blue velvet. It procesionó with him in 2010, the occasion of 450 anniversary of the Brotherhood. Participates representation, wearing the robe of the Star, Brotherhood of Rocío de Triana, that meets the 200 anniversary of its founding. The brotherhood is developing a program of events to mark the 50 Anniversary of the first house of brotherhood that was in Seville.