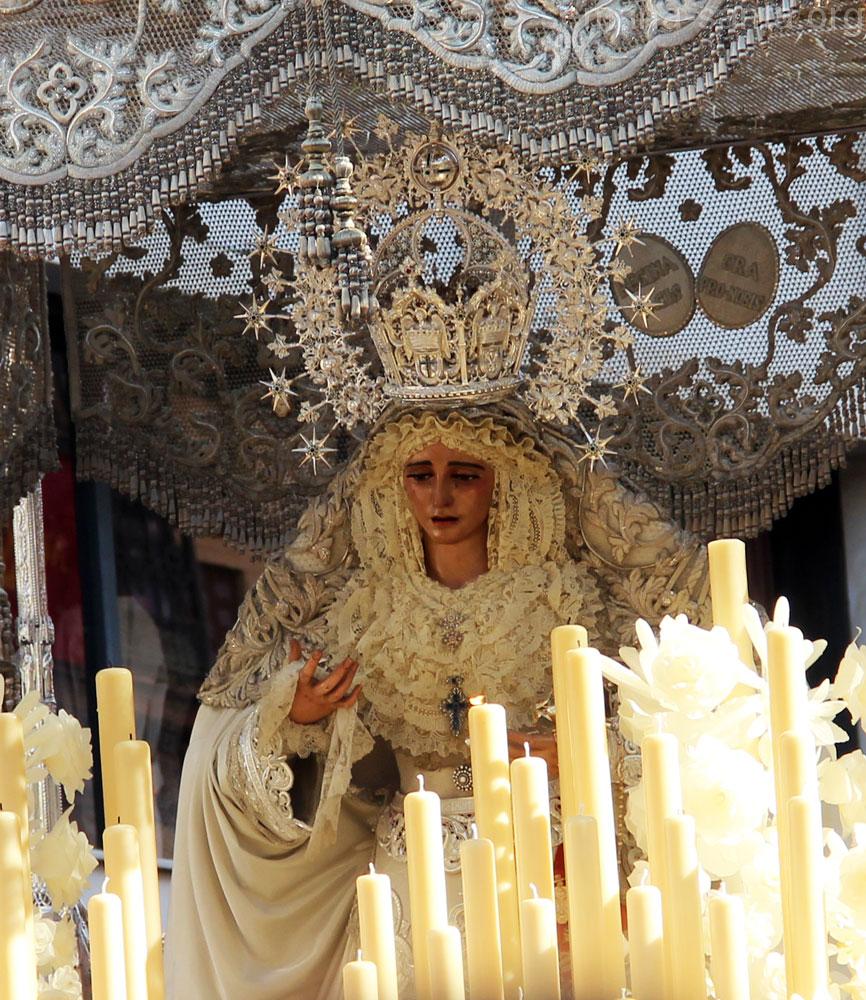 FOREMEN: Ernesto Sanguino and its subsidiary.

COATS: white, layer, with buttons and red cingulate in Christ and the Virgin Blue.

Social work: He “Victoria project” brothers helps to create your company. Funds the Family Guidance Center of the parish of San Sebastián.

Premieres 2018: The procession of Our Father Jesus de la Victoria has a new logo: embroidered in gold script on burgundy velvet and silk in the studio of Manuel Solano as designed by Gonzalo Navarro. The central card, leather trimmed, reads the verse of the Book of Psalms "Your future is peace".

Premieres 2017: They are new in this Palm Sunday releases on the occasion of the canonical coronation of the painful: Toque sobremanto and Lábaro the coronation -insignia open the eighth Tranche, both made by Manuel Solano, and restoring the workshop Brothers Delgado performed on the crown of the Virgin. It has also been involved
Cross Guide.

OBSERVATIONS: Peace has had a remarkable growth in recent years, with deep roots in the Porvenir, as well as the Huerta Health. Since 1995 It has a riding squad, consisting of a lancer, six beaters, un lead, another rider with pennant and seventeen musicians. It is the first brotherhood in going outside at Easter. The Virgin holds in his hand an olive branch Silver. The dove is in the roof canopy takes another branch in its beak. It represents the end of Flood. It has recently acquired a local units to expand the fraternity house.

HISTORICAL FACTS: The beginnings of the Brotherhood are born in the Pharmaceutical Park Army, situated in the Park of Maria Luisa. Born to give thanks for the end of the Civil War.

HIGHLIGHTED PLACE: his Departure, for being the first of the Easter Sevillana and the Park. By Miguel Manara to San Gregorio.