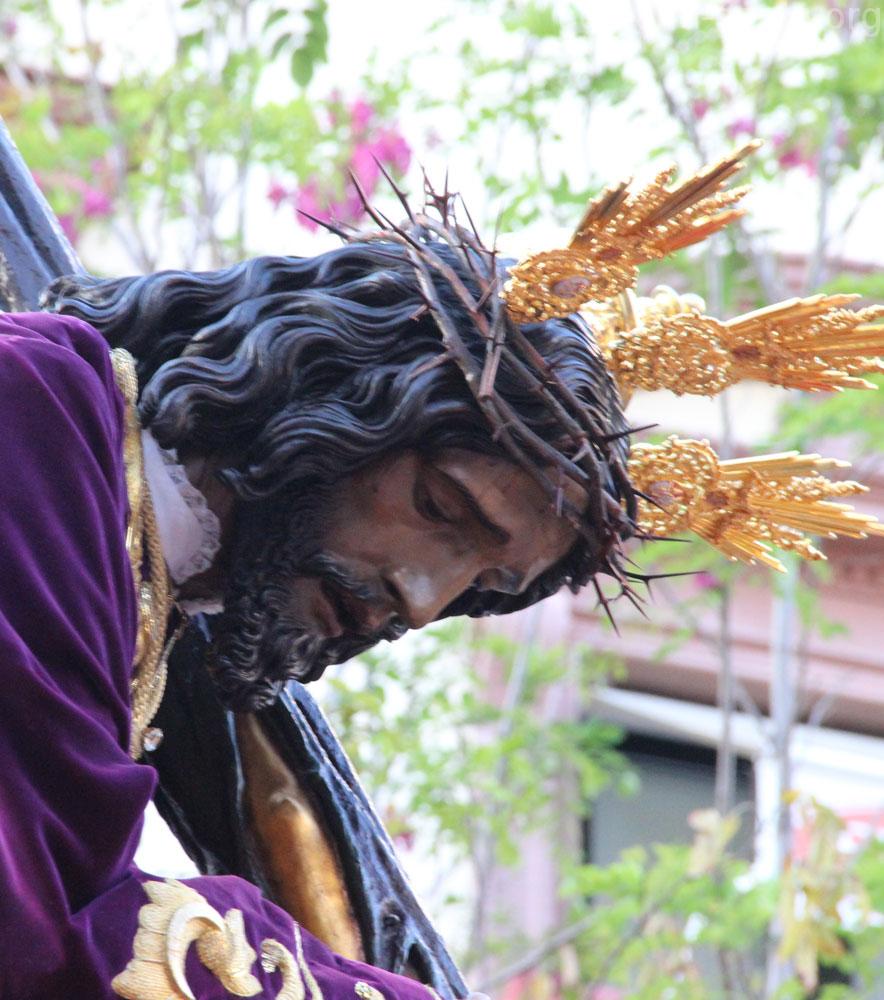 Real, Illustrious and Fervent Confraternity of the Blessed Sacrament, Animas Benditas, Pure and Clean Conception, Holy Christ of St. Augustine and Brotherhood of Nazarenes of Our Father Jesus of Sorrows and Our Lady of Grace and Hope.

COATS: white, layer, with purple velvet mask in the Lord and in the Virgin Green.

MUSIC: After the Nazarene, Band of Bugles and Drums "Essence" and, in the canopy, the Band of the Red Cross.

Social work: Provides financial support to parish Caritas and the Commissary of the Foundation Casco Antiguo.

Premieres 2022: The brotherhood has started the project of completion and renovation of the crown of the Virgen de Gracia y Esperanza, within the program of acts and extraordinary cults on the occasion of the 75 anniversary of the imposition of the prize and the 25 from the elevation of the coronation to the canonical rank.

Premieres 2019: Out for the first time restored the roof canopy, original work of Martin Cruz sisters 1954. The new velvet on which have passed embroidery workshop in Santa Barbara recovers the original green, as they conceived their authors. Since 1971, when the nephews of Joseph Caro restored, so far it has been garnet. Also it shines especially the early saya output of the Virgin, recently revamped their dressing, the embroiderer José Antonio Grande de León.

Premieres 2018: The image of Simon of Cyrene or "Simon of Cyrene", original work of Antonio Illanes, out for the first time after its restoration by Victoria Fdez. and Jose Angel del Valle.

Premieres 2017: Restoration and cleaning of the roof canopy by the workshop of José López Gandara. Premiere Mary Grace march composed by the musician Cristóbal López Gandara.

OBSERVATIONS: The Lord again get in step tunic embroidered by Fernandez and Enríquez 1995. She has had this brotherhood boom in recent years. The pallium passage is considered one of the best "sounds", with harmonious bending of scenes and varales. The image of the Lord is full size. The cirinero Carrying the Cross called and told Simon of Cyrene because it is of Cyrene. Note the mantle of the Virgin, designed by Antonio Garduño Nava, released in 1966 and crafted in the Workshop Esperanza Elena Caro.

HISTORICAL FACTS: It was founded in 1901 when D. Romualdo Jimenez, at that time pastor of San Roque, he met with a group of young people between those who were D. José Gómez Garrido, D. Antonio Silva and D. Pedro Pablo. Its rules would be adopted one year later. From 1936 a 1944 It was hosted in San Ildefonso and Santiago by the fire that suffered the parish. Traditionally it has been linked to the City of Seville through Cristo de San Agustin.

Premieres 2015: He will leave the parish of San Roque after a year of exile for the closure of the temple.

PREMIERES 2014:The passage of the Lord has just been restored by Miguel Santana. The brotherhood out this year exceptionally from the Church of St. James the closure of the parish of San Roque. The images are being educated in the convent of San Leandro.

PREMIERES 2013: They have finished restoring vents passage of Christ, including handle levers and corners, jobs that were already initiated last year and have been made by the workshop D. Miguel Santana Morato. It is true this year 75 anniversary of the blessing of the Virgin and 50 years of the first output of Cyrene.