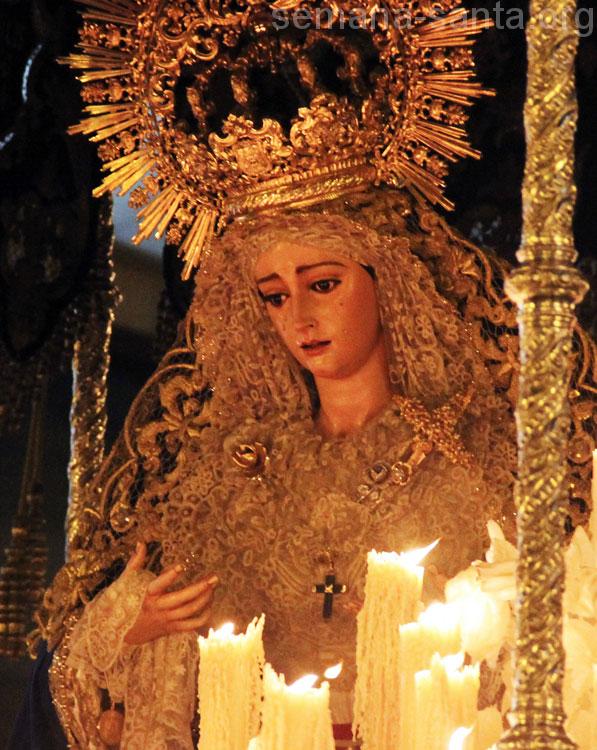 Real, Illustrious and Fervent Brotherhood of the Holy Cross and Our Lady of the Rosary and Confraternity of Nazarenes of the Holy Christ of the Waters, Our Lady of Suffering and the Virgin of Guadalupe.

Chapel of Our Lady of the Rosary (C / Dos de Mayo).
2 Steps (Cristo de las Aguas, the Virgin of Suffering, and Our Lady of Guadalupe)

TUNICA: white, tail, with purple mask and belt of esparto.

MUSIC: Band of Bugles and Drums Ntra. Mrs. of the Rosario de Cádiz behind the Christ, and the Municipal Band of Mairena del Alcor after the canopy.

Premieres 2018: Powers for the Christ of Waters Elena Moreno Bernal work. Jesus Arco has restored a saya of Elena Caro.

Premieres 2017: It has been restored sobremanto touches that looks the Virgin of Guadalupe, a work that has been done in the workshop Moreno Bernal Rota (Cádiz). It has also been restored rod bearing during the season of penance older brother goldsmiths in San Juan.

OBSERVATIONS: This guild has stabilized after return to its renewed Rosario Chapel. The first step is a classic Calvary, It is presenting the new image of the Magdalena, by Alvarez Duarte, like the San Juan that already existed. In step pallium is the Virgin of Guadalupe, an image of the same author, He noted for its youthful face being known for “Virgin girl”. There Nazarenes of the Virgin give bonnets Mexican candy, since the Vrgen of Guadalupe is the patroness of Mexico.

HISTORICAL FACTS: This Brotherhood was founded in 1750 in the Church of San Jacinto (Triana) and there he remained until 1942 in which he suffered a fire and lost images and enseres.Se moved to Saint Barthelemy.  It was reorganized and from 1977 It is at the headquarters of the street Dos de Mayo. This year 2018 It is fulfilled the 75 anniversary of the stature of Christ.