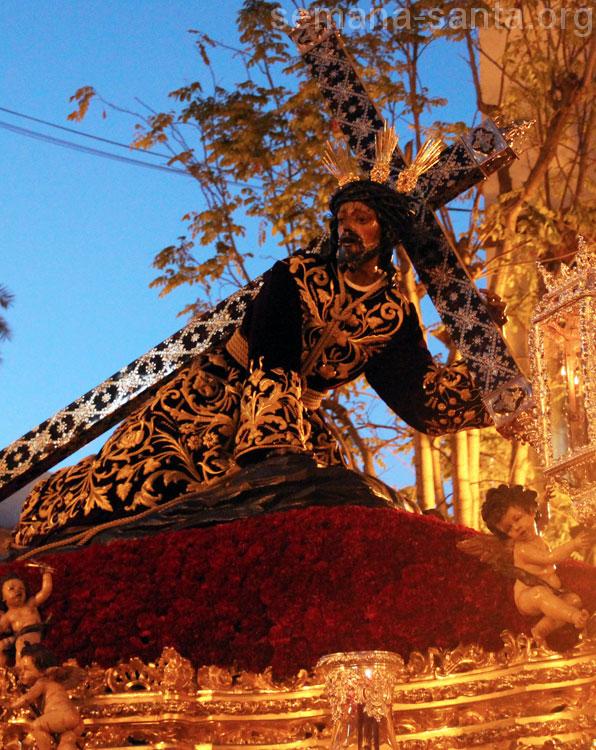 MUSIC: Musical Chapel in the Christ and the Band of Master Tejera in the Palio.

Social work: Assists with food to the needy. Help the dining Pumarejo and the Hospital de la Caridad.

PREMIERES 2022:  new badge: labarum of Saint John, whose drawing has been the work of the goldsmith Jesús Domínguez Machuca through an old design by Juan Carrero. The vents of the passage of Christ come out after having undergone a restoration process.
PREMIERES 2017: Cruz Guide and restored by Manuel Antonio Gilders S.L.. and the goldsmith Jesus Dominguez. première 4 silver censers Jesus Dominguez, 2 for each step, with drawing Juan Carrero Rodriguez and two gowns of pertiguero.
PREMIERES 2017: Look newly restored side scenes of step pallium. After these recovery efforts, which he has conducted the workshop Successors Elena Caro, culminates a process of fine tuning that began in 2012.

OBSERVATIONS: This brotherhood has two steps of great merit, very complete in every detail. The Lord brings a magnificent cross tortoiseshell and silver, acquired the Brotherhood of Jesús Nazareno, Ecija. Both steps have skirts with artistic embroidery and ivory carvings lead. This brotherhood has a remarkable musical heritage, in projecting "Jesus of Sorrows", one of the most traditional Easter marches and is performed at the exit of Christ. Caring musical repertoire pall of Sorrows has recovered “Up Cofradías No. 1” Master Pedro Braña, dedicated to the brotherhood of Sorrows. Following the agreement of the Governing Board, in May 2009, women made first season of penance in 2010 Nazarene wearing the habit.

HISTORICAL FACTS: It originates in the Parish of San Vicente in 1875, to worship an image of the Fallen from the Casa Grande del Carmen convent. After several years of difficulties, It reorganizes in 1923 and leaves from the next year on Easter Monday.