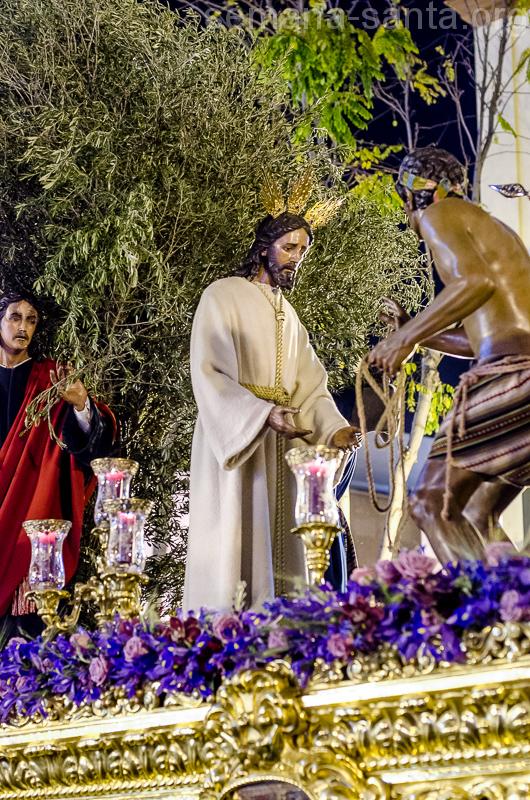 Pontifical, Real, Illustrious and Fervent Brotherhood and Confraternity of Nazarenes of Our Father Jesus of Sovereign Power in its Prendimiento, Virgin of Regla and St. Andrew the Apostle

IMAGES: The complete mystery is Lastrucci (1945). The Virgin is attributed to Luisa Roldán, La Pulley. The image has been restored three times.

COATS: Black with black and purple mask layer in red in Christ and the Virgin.

MUSIC: Bugles and Drums of the Cigar in mystery and Band of Santa Ana de Dos Hermanas after the Palio.

PREMIERES 2022: Restoration of the tunic of the Lord, work of Juan Manuel Rodríguez Ojeda, by José Antonio Grande de León.

PREMIERES 2019: Step completes restoration of mystery in the workshop of the Gonzalez brothers with gold vents.

PREMIERES 2018: Restoration and gilding of basketful and cresting and cleaning of the gussets mystery step in the workshop of Hermanos González. The angels distributed throughout the basket have been restored by Manuel Mazuecos. New parihuela step of mystery and reinforcement of the vents in the carpentry workshop of Enrique González.

PREMIERES 2017: Restoration of the cross guide and the rulebook at the hands of the Brothers Delgado. Restoring the candelabra of windshields mystery step in the workshop of Hermanos González, who will continue recovering the gold pass for the next two years.

CURIOSITIES: Nazarenes do not distribute candies, as usual, but sometimes peaks deliver bread. In his social work delivered bread to several soup kitchens.

OBSERVATIONS: La Virgen de Regla goes on smooth Palio drawer being in his restoration. Bakers has a very popular environment. The passage of mystery is a large and represents the Prendimiento (when they apprehend Jesus in the Garden of Olives) with a spectacular composition. The sewing workshop Brotherhood has decorated the exterior roof of the pallium passage, which it has the peculiarity of forming two crosses of San Andrés with the front batches of candelería, being is of more candles have at Easter.

HISTORICAL FACTS: The Brotherhood was founded, in St. Lucia, the late sixteenth century, although not until the eighteenth century when it is accredited its link to the Bakers'. In 1896 It merged with the Brotherhood of Alarifes, moved to the chapel of San Andrés.