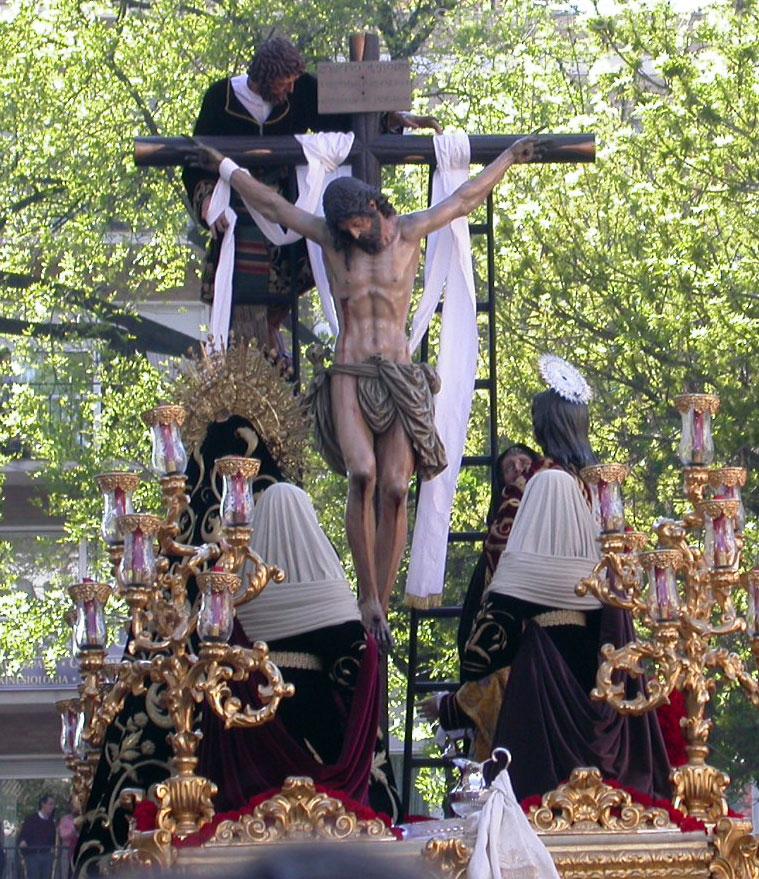 Pontifical, Real and Illustrious Sacramental Brotherhood and Confraternity of Nazarenes of the Sacred Order of the Holy Trinity, Holy Christ of the Five Wounds, Our Lady of Conception, Our Lady of Hope and St. John Bosco

Sanctuary of Mary Help (C / Maria Auxiliadora).
3 Steps ( sacred Order, Christ of the Five Wounds, Our Lady of Conception and Our Lady of Hope).

IMAGES: The Sacred Order has several authorships, highlighting God the Father, anonymous XVII). God the Son, Emilio Pizarro (1913). The Archangel and the Dragon, Magana (1907). The rest of the Mystery Talló Dubé (1994/97).

Christ is Alvarez Duarte (2002). The Virgen de la Concepción is jerrycan (1956). the rest of the mystery author unknown, except Nicodemus that is the work of Antonio Dubé de Luque (1998).

The Virgin of Hope is a sculpture of Juan de Astorga (1820).

MUSIC: Youth of the Cigar in Cross Guide, Cigarreras in the allegorical step, Three Falls in the Mystery and Oliva de Salteras in the Virgin.

PREMIERES 2018: Embroidery front and rear vents Sacred Passage Decree, made by Mariano Martín Santonja according to the design of Dubé de Luque. New embroidered white skirt in the same workshop. Side vents of the passage of Christ of the Five Wounds will look completely gilded by the Gonzalez Brothers. Up "look of hope", Julian Jiménez Quintero. pluvial early nineteenth century embroidered cloth of gold.

PREMIERES 2017: Gussets vents passage of the Five Wounds, works of the Brothers González. Dorado of the front and rear vents and corners that step. Marcha "Lux Aeterna" dedicated to the Sacred Order.

Social work: Reinserted prisoners in third grade and this year have again asked pardon of a prisoner.

OBSERVATIONS: The Trinity is a brotherhood linked to the Salesians. It has a step canopy of worth and very complete, which he highlights the goldsmith, silver, vents with chapels, as well as good embroidered canopy and mantle. Trinidadian Hope is one of the most beautiful images of the nineteenth century.

HISTORICAL FACTS: The first rules held by the brotherhood were approved by the Provisor the 18 May 1555, However, There is a dated document 1507 in which we talk about a previous rules.