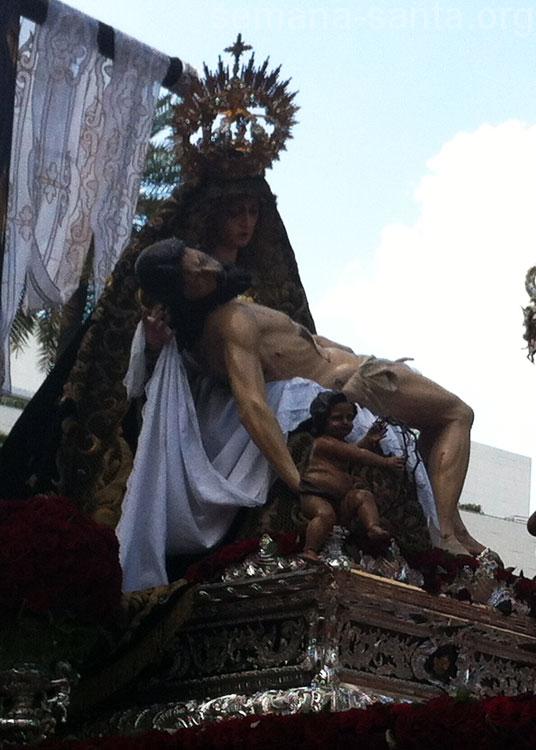 Real, Illustrious and Venerable Brotherhood of Nazarenes and Primitiva Servite Confraternity of Our Lady of Sorrows, Holy Christ of Providence, Our Lady of Soledad and San Marcos Evangelista

Chapel of Sorrows (C / Seven Sorrows of Our Lady).
2 Steps (Christ of Providence and Our Lady of Solitude).

embroidery: Palio embroidery drawer in the Convent of Santa Isabel (1983/84) and mantle of Jesus Rosado (2009).

Social work: Through the Foundation helps convents Holy Saturday, participates in the commissary of the Old Town and supports resources to the Convent of Santa Isabel.

HIGHLIGHT: The intemperate drums that often accompany both steps in his penance station.

OBSERVATIONS: It is characterized by a classic and sober style. The Virgin wears a beautiful crown, Luque designed by Dubé. The pallium has original embroidery, also Dubé. The number of altar boys has grown significantly in recent years. Cross guide is accompanied by music chapel (oboe, clarinet and bassoon). The first step represents a Pieta, that is the Virgin with Jesus dead in his lap, before the cross.

HISTORICAL FACTS: Their origin is unknown. However, traditionally the foundation of this brotherhood is dated August 1696, when they were adopted its first rules, in San Marcos. It is added to the order of the Servants of Mary in 1720. Nevertheless, It is not to 1955 when it reorganizes by a group of brothers. Approval as a brotherhood of penance does not reach 1971.