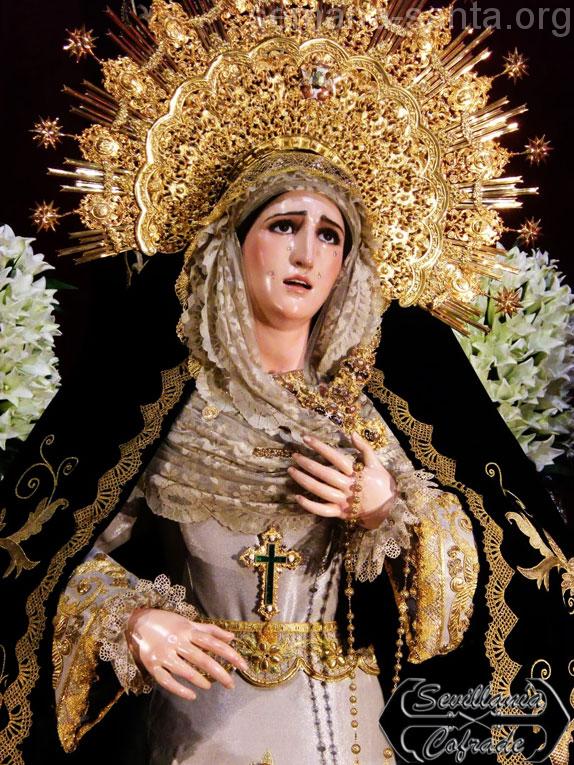 Real, Illustrious and Franciscan Brotherhood and Brotherhood of Nazarenes of the Holy Cross on Mount Calvary, Holy Christ of Salvation and Our Lady of Solitude

IMAGES: The Virgin is the work of Gabriel de Astorga (1851), originally kneeling, Sebastián Santos stood in 1954 and it was also retouched by Manuel Dominguez 1967. The Christ of Salvation, not procesioa, Manuel is Cerquera (1935).

HIGHLIGHT: One of the jewels of this brotherhood are the candelabra of windshields of Manuel Guzman Bejarano, with angels cherubs Rafael Medina Barbero, conducted between 1957 Y 1979.

HISTORICAL FACTS: The terrible plague that devastated Seville 1649 forced to enable some public places such as cemeteries. Precisely in Cano Quebrado (Plaza de Monte-Sion) an iron cross which the faithful worshiped in memory of the deceased was placed. These are the origins of the brotherhood, which it has the iron cross of that cemetery on the altar of the Virgin. Nevertheless, did not have its first rules to 1847. In 1851 he moved to San Buenaventura. His first Rules are 1847.