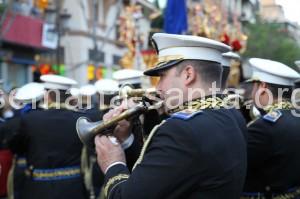 Behind a step of Christ must be the music of a band of bugles and drums or musical group.

Brotherhoods carry the most austere chapel music in front of Christ. Usually it played by wind instruments (oboe, fagot…)

Do you know that the bands that accompany the steps may not enter the Cathedral? Being a season of penance is an act of high religiosity and thus greater spirituality and meditation is achieved. Then, after leaving through the Puerta de los Palos de la Catedral, stepping and Plaza Virgen de los Reyes the band joined the tour.

NOTE:
We received an e-mail from a member of the band Stmo. Christ of the Three Falls with the following clarification:

“It is true that the bands do not enter the SIC, except that the band is of brotherhood, in this case the musicians also are doing and have their ballot station site like the rest of the brotherhood, at least in the Band Stmo. Christ of the Three Falls Esperanza de Triana. Of course we do silent. Thank you, a greeting.
Jose M. Sánchez.”