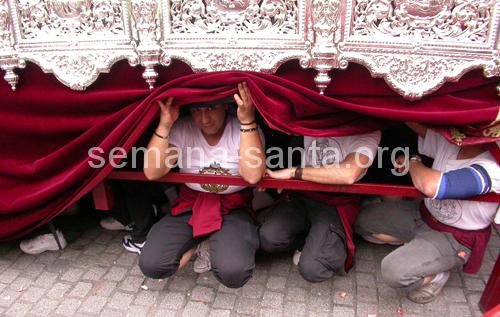 Until 1973 were exclusively professional bearers, they charged for taking steps, but this year came the first band of brothers bearers. Today the bearers are the brothers of different brotherhoods own (no charge for exit) thus they are doing their penance station. The only exception is the Brotherhood of Santa Marta which still carries professional costaleros.

The chosen location, the trabajaderas… to be under your step, carrying his Christ or Virgin through the streets of Seville. The bearers who occupy positions of the sides are called Trabajadera “coastal”, which are at the center are the “currents” and located between the two are the “fixers”

All are commanded by the foreman, responsible for his gang. If the brotherhood is silence, -to be called the step up- three raps…but if the music sounds you can hear that peculiar call to his men “To this is…”

LOGOS… not to miss a detail
Sevilla is a custom in the morning to visit the churches -before procession of steps-, to see the sacred holders thereof. We also recommend visiting these temples altars badges, where we can see the badges that later become part of the processional courtship.

During the various processions of Holy Week, there are many badges that we can see when it passes in front of us a brotherhood. These are the most significant:

CROSS GUIDE It is always open courtship of a brotherhood. It may be accompanied by lanterns or poles.

SENATE: It is the first insinia that appears behind the Guide Cross procession in the passage of Christ. We can read the initials SPQR (Senate of the Roman People)

FLAGS OF STEPS: There are step flags of Christ and Virgin step. The colors take are those of each brotherhood. We can see other flags, as the papal, but only if the guild has that title.

HORNS: Currently are ornamental elements, but they were formerly sound. If we look in detail we see that consist of a tube accompanied by an embroidered cloth. 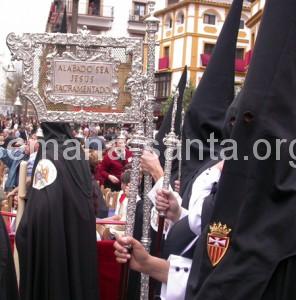 RULEBOOK: They contain, as the name suggests, the rules of brotherhood. We need to focus in detail on the covers of the same, very worked by hand. It is usually the last step of christ logo, but there are brotherhoods that carry in the procession of the Virgin.

ESTANDARTES MARIANA:  Accompany the procession of the passage of the Virgin. They have embroidered cloth paintings (or sizes) of the Virgin Mary.

SIMPECADO:  It is the name given to the Marian banner at its center a picture or painting of the Immaculate Conception.