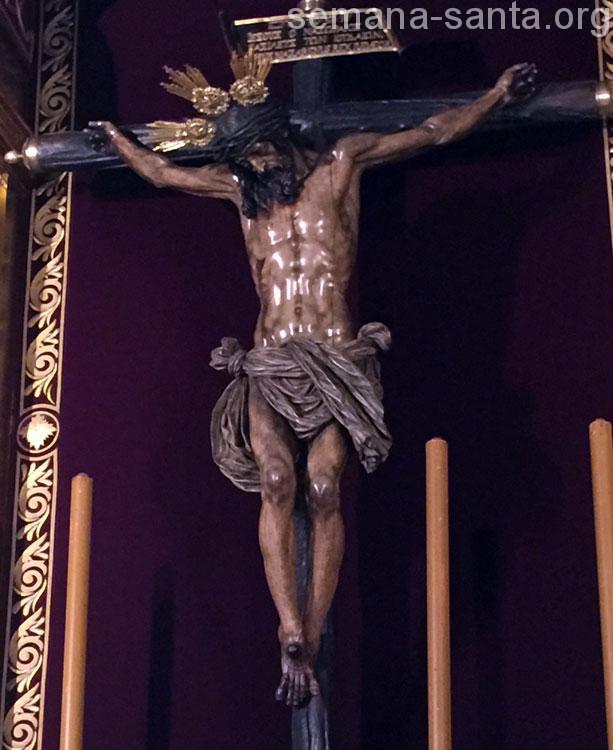 Primitiva Pontifical and Royal Brotherhood of Nazarenes Confraternity of the Holy Entry into Jerusalem, Holy Christ of Love, Our Lady of Mercy and St. James.

MUSIC: Band of The Cigar in step Palio. Christ does not lead.

Social work: intended 1/3 of its budget to welfare works. Andex and collaborates with the Social Integration Centre “Luis Jimenez de Asua”, providing scholarships in their studies to children of prisoners.

Premieres 2022: New candlestick for the passage of the canopy

OBSERVATIONS: It is the only black brotherhood that Palm Sunday procession. The pallium has very good embroidery and interesting goldsmith. This part of the courtship takes no cross guide, coming out in the Borriquita, to belong to the same fraternity. Another curious and quirky detail of this brotherhood is the pelican feeding its young with its own blood and is located at the rear of the Blessed Christ of Love. It is the only guild that does not ask for permission to start the official race, as the calls for Borriquita. The brotherhood performs an important social work, serving 140 commissary families in which collaborate the brotherhoods of the old town.

HISTORICAL FACTS: It was founded in 1508, in the Church of Santiago, in order to assist prisoners who peopled Sevilla during the race Indies, hence the name of their holders. In 1618, due to reduced hospital decreed by Cardinal Rodrigo de Castro,  enn matches the Church of the Third with the Brotherhood of the same year Borriquitta and decide to merge.

PREMIERES 2014: Just edit the number 100 your newsletter with a special edition. The Brotherhood performs an important social work serving 140 commissary families sponsoring the brotherhoods of the old town.