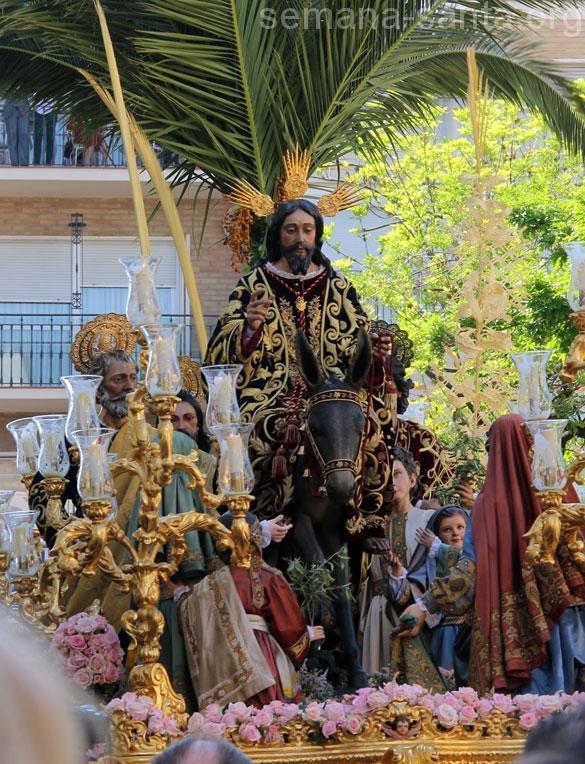 Primitiva Pontifical and Royal Brotherhood of Nazarenes Confraternity of the Holy Entry into Jerusalem, Holy Christ of Love, Our Lady of Socorro and Santiago Apostol

IMAGES: The size of the Lord is anonymous, as well as those of Santiago, San Pedro y Zacchaeus (XVII century).  San Juan (Castillo Lastrucci, 1935). Children are Juan Astorga (1805). The women and girls of Fernando Aguado (2014). The Hebrews are Juan Abascal 1976/78). The image of the Lord is attributed to the workshop of Roland.

embroidery: Tunic and mantolin the Lord of Rodriguez Ojeda (1904) and embroidery application Padilla in the rest of the mystery (1945).

DURATION: It takes to go 35 minutes.

MUSIC:  Band Sagrada Column and Whips ( Las Cigarreras) in the Cross of Guide and Bugles and Drums Band of Our Lady of the Sun in step.

OBSERVATIONS: The passage of the Borriquita out separately from the other two of Love, who comes to the Cathedral last. The participation of children is large in this courtship.

HISTORICAL FACTS: Founded in the late sixteenth century, by gauges Alhóndifa. It merges into 1618 with the Brotherhood of Love which accompanies their courtship. Nevertheless, from the year 1970 divide the brotherhood, so that the Borriquita is the first in conmenzar Penitence Station to the Holy Cathedral Church.