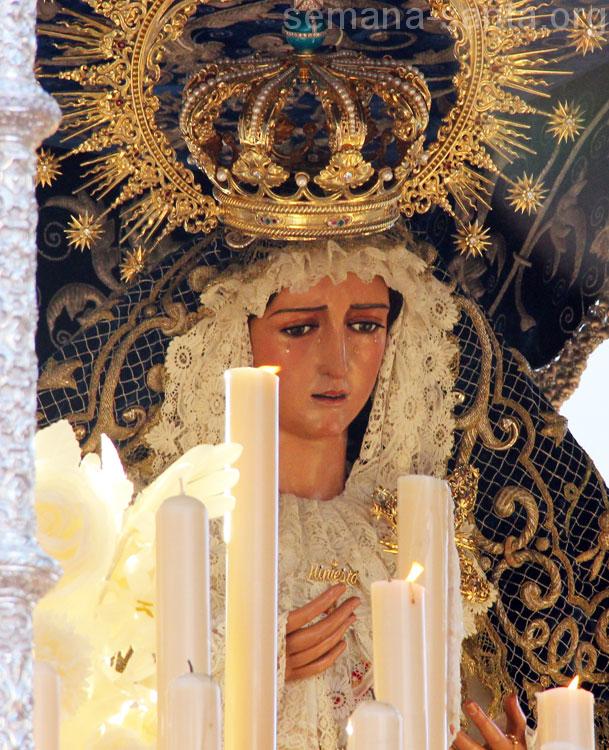 MUSIC: Saint Mary Magdalene of El Arahal on the crucifix, and in the canopy Municipal Band of Mairena del Alcor

Social work: He “Families program” Pumarejo serves the dining handing over 4.000 Kgs. of food. It is planning to create a center of family counseling through the “Madre Foundation Hiniesta”.

OBSERVATIONS: The mayor of Seville, Juan Espadas, accompanied by some councilors, It is part of courtship in the first leg as Honorary Brother Hiniesta. This linkage is because the glorious image of the Hiniesta is patron of the city council from 1649. exit and entry will not miss, very difficult for the shoulder of the door of San Julian. It was the Brotherhood who created the capirote that forms the mask of habit Nazareno as we know it today.It is one of the brotherhoods that has grown in recent years, with deep roots in his neighborhood of San Julian and the north of Sevilla. Hiniesta glory is the patroness of Ayuntamientoy figure on the front step pallium, a bandstand. For this reason, the brotherhood carries a municipal representation. Tthe base in the Virgin there is a reliquary ashes of the old Virgin, that burned next to Christ in a fire.

REMARKABLE SITES: On the streets of the Macarena (Pumarejo and Rapporteur), return by San Marcos, The exit door difficulty ogive. Lady in Campana.

HISTORICAL FACTS: In 1879 recasts it as we know it today. Nevertheless, the beginnings of the Brotherhood back to 1560. Their primitive images, a Christ of Felipe de Rivas, Our Lady of Sorrows (attributed to Martinez Montanes) and the former glorious image (anonymous fourteenth century), They disappeared in a fire in 1932.

Premieres 2022: The brotherhood recovers a saya that the image wore at the beginning of the 20th century, whose author has been Francisco Javier Sosa Sánchez and is made of silver tissue, embroidered in fine gold and silk, through the use of techniques such as the blade, armed sample, giraffe and cardboard.

Premieres 2019: saya embroidered in gold thread with daylilies in silver thread on blue velvet inspired by a piece of Juan Manuel Rodriguez Ojeda, designed by Gonzalo Navarro and embroidered by Manuel Solano. It is a gift from the women's group of the Virgin Ropero.

Premieres 2016: Restoration of the roof canopy, the burgundy skirt and mantle output, and the sacramental banner. New skirts step of Christ.

Premieres 2015: Christ will restored by Pedro Manzano has recovered the original key of policromía.  The brotherhood celebrates its 450 anniversary. Manuel Solano has cleaned up the mantle and carried the flag with paint Concepcionista Díaz Arnido and antler Orfebrería Bernet, which has restored the rulebook. TDF anniversary of the adoption of its first penitential rules are met (1565-2015).

PREMIERES 2014: Virgin will come after the restoration that has been practiced Pedro Manzano. Christ will intervene in April, which premieres a gold powers Workshop Children of Juan Fernández. The Brotherhood is preparing a series of events to commemorate next year its 450 anniversary as a brotherhood of penance.

PREMIERES 2013: This year include two new marches created for the Brotherhood:  “Hiniesta, Passion and Glory "by Juan Antonio Green Y "La HiniestaGloriosa "of Francisco Pizarro. Restoration banner, which it is placed a new cross, Orfebreria work done by Children of Juan Fernández and the new parihuela step pallium, conducted by the carpentry shop Brothers Caballero. Palermos of deputies of TramoPedro Manzano has replaced the arms of the Virgin. This year recovers the journey through the alleys of San Julián, Hiniesta crossing the street in full. It will take unprecedented itinerary back to not go down the street because of a work Lira. It commemorates the 75 anniversary of the blessing of Christ.