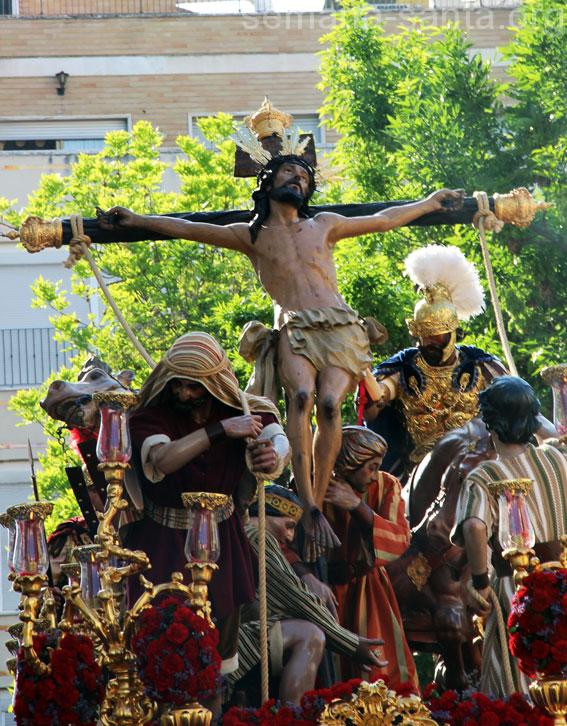 Pontifical, Real and Illustrious Brotherhood Sacramental, Immaculate Conception, Animas in purgatory, San Sebastian Martyr and Confraternity of Nazarenes of the Holy Christ of the Exaltation and Our Lady of Tears

Parroquia de San Roman. Its realization of Penitence is done from the Church of Consolation (Vulgo third)
2 Steps (Exaltation Christ and Virgin of Tears).

IMAGES: The Exaltation of Christ (Roldán workshop, 1687), Dimas and Gestas, thieves (attributed to Roldana, XVII), the executioners (Arches and Guadix, XVII), and horses and riders (Juan Abascal, 1960). The rest of the mystery is Luis Antonio de los Arcos and Cristobal de Guadix (XVII century). The Virgin is an anonymous work of the eighteenth century.

COATS: white, tail, with purple mask and belt of esparto.

MUSIC: Band of Bugles and Drums Step and Hope of Malaga, after the mystery and with the canopy Banda Municipal de El Arahal

PREMIERES 2019: Marcha "Exaltation: back to Santa Catalina ", Jose Manuel Bernal. Virgin has a new brooch with the iconography of Santa Catalina.

PREMIERES 2016: The march "Every Teardrop", dedicated to the Virgin of Tears composed by Joaquin Espinosa de los Monteros. In 2017 will 13 years later from the parish of Santa Catalina restored.

TO CONSIDER: The length of the passage of mystery, He is known as one of the largest of Easter.

OBSERVATIONS: The former composition was modified at the beginning of the century and, later, in 1960, taking the current, with the two new horses. This step is considered as one of the best and most complete among mystery. It has great proportions, I joined weight, It makes it very difficult for the crew bearers. The Brotherhood maintains a style, It is seen in some badges, especially in its splendid cross guide, adorned with attributes Passionists. In the mystery of the moment in which two executioners lift the cross is depicted pulling ropes, and two, the set down. At the front of the pallium contained an image of Santa Catalina.

HISTORICAL FACTS: It is one of the oldest corporations in the city and was founded in the sixteenth century in San Benito de la Calzada, doing penance station to the Cruz del Campo. In 1621 he moved to the Church of Santa Catalina.  Since its inception was distinguished by having members of the nobility of the city. Rules prohibiting their membership “Moors and prison desdencientes persons or other bad trades they had seen”.