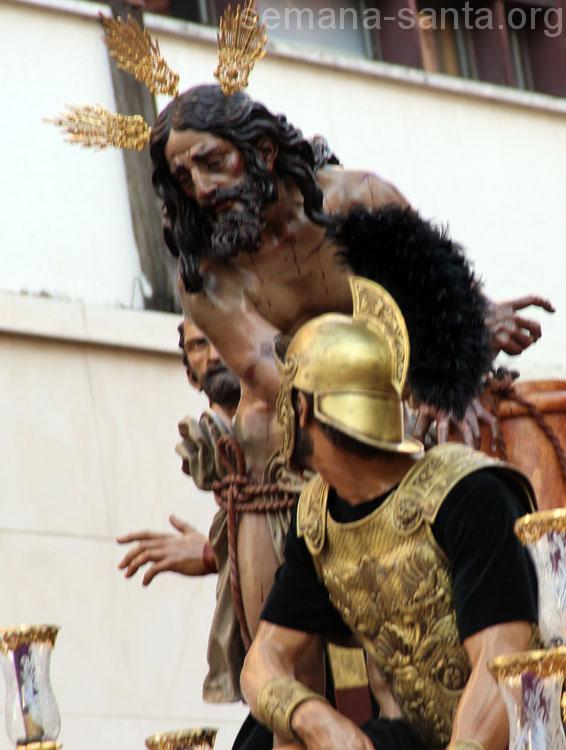 PREMIERES 2018: The mantle of the Virgen de la Victoria, Rodriguez Ojeda, sale restored by Jesus Rosado. They have also been restored vents and pass canopy tail candelabra by the Brothers Delgado, and jars by Orfebrería Triana. Cross raised Manguilla designed by Rafael de Rueda based on one of 1710 and executed by Jesús Rosado.

PREMIERES 2017: Restoration ivory Christ of the Cross raised by José Antonio Navarro Arteaga and goldsmithing of that badge and the two candlesticks that escorted by Orfebrería Triana, who also recovered the base of the Virgin, the s. XIX.

PREMIERES 2016: Restoration of the poles of the pallium by Orfebrería Triana.  Two little pages suits and clothing monaguillos. Two new flags for penitencia.La brotherhood station has requested the Canonical Coronation of the Virgin, who received the 30 May the Medal of the City of Sevilla. José A. Navarro Arteaga is carving a new image for the brotherhood, the Christ of Purple, to recover an ancient devotion.

OBSERVATIONS: Its popular name is due to the historical ties it has with the Tobacco Factory. During the centuries XVII, XVIII and XIX was the second in command at the station of penance. In this brotherhood out only Roman Easter carrying a black feathers on his helmet.

HISTORICAL FACTS: Its foundation dates from 1563 San Benito de Calatrava. He moved to the chapel of the Tobacco Factory to 1904, after a period of splendor in the Church of the Convent of Our Lady of Consolation, of the Fathers of the Third Order of San Francisco, widely known as the Third. In 1965 moves to its current headquarters in Los Remedios.