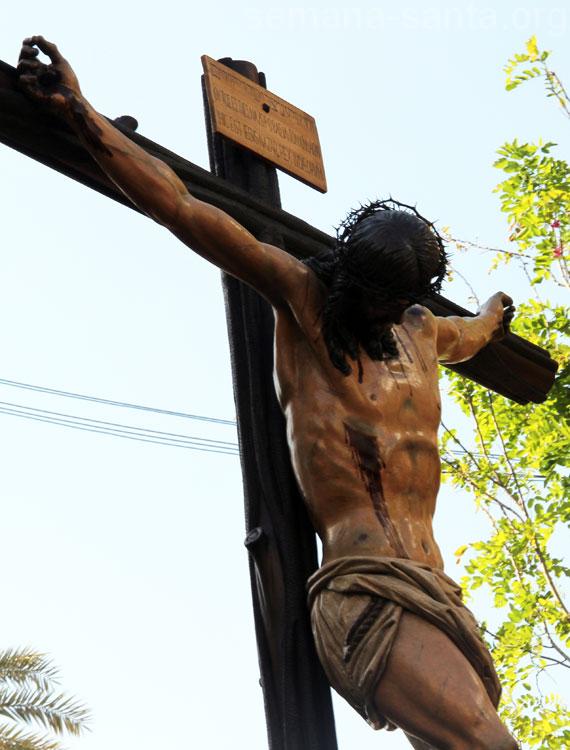 Antigua, Pontifical and Franciscan Brotherhood and Brotherhood of Nazarenes of the Holy Christ of the Foundation, and Our Lady of the Angels

Chapel of Angels (C / Recadero).
2 Steps ( Christ of the Foundation and Our Lady of the Angels).

ELDEST BROTHER (in the Brotherhood it is known as Mayor): Eduardo Garcia.

MUSIC: Chapel in Christ and the Band “It is. Maria de las Nieves” Olivares in the Virgin.

PREMIERES 2019: Crown has been enriched with more than 1.200 precious stones donated entirely by brothers of the fraternity for Coronation.

PREMIERES 2018: Embroideries will wear the pallium in all its glory after cleaning and restoration to those who have been subjected in the Andalusian Institute of Historical Heritage. This concludes the process of recovery embroideries step pallium to design Juan Miguel Sanchez and were embroidered in the Trinitarian Sisters Workshop in the early 60. Black Flag embroidered Santa Clara Workshop run by José Luis Sánchez Expósito on design José Manuel Martínez Hurtado.

PREMIERES 2017: The mantle of Our Lady of the Angels looks after the restoration which has been subjected in the Andalusian Institute of Historical Heritage. This is an embroidered piece by the Trinitarian Sisters according to the design of Juan Miguel Sánchez 1961. They have discovered that the ivory has belonged to a male elephant about 50 years in Central Africa.

OBSERVATIONS: The Negritos has two steps with own label. In the first goes the old image of Christ Foundation. The passage of the Virgin of the Angels has exotic embroideries, with some oriental style evocation, Seville is the only modernist style designed by artist Juan Miguel Sánchez, which it has recently been enriched with goldsmith Ramón León. The pallium passage is one of the few examples of cutting-edge design of Holy Week in Seville. The new flag is embroidered Pontifical coat of Pope Urban VIII who in 1625 recognized the rights and Rules of brotherhood. And in the Concepcionista the names of the brothers appear 2 Y 3 Fernando perpetuity Pedro Molina and Francisco Moreno, they were sold as slaves to pay cults honoring the Immaculate Conception 1615.

HISTORICAL FACTS: The Brotherhood is the oldest in Sevilla, it was founded in the late fourteenth century (Cardinal Mena based on 1393 a brotherhood of Gloria in the Hospital of Los Angeles to meet black people) .  It merged with a brotherhood of penance also blacks, founded in 1554.  In 1604 erected the present chapel. His Excellency Mr.. Archbishop of Seville, D. Juan Jose Asenjo, He is the older brother.