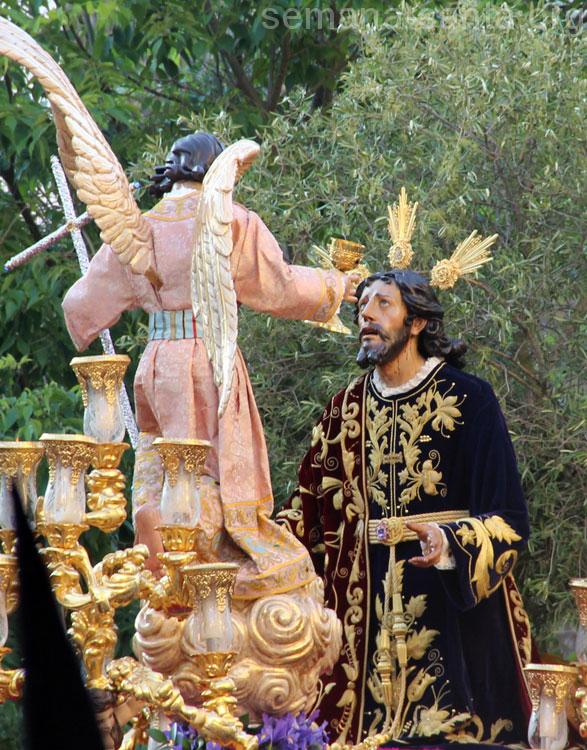 Pontifical, Real, Ilustre and Antigua Brotherhood and Confraternity of Nazarenes of the Holy Prayer of Our Lord Jesus Christ in the Garden, Holy Christ of Health and the Virgin of the Rosary in their Sorrowful Mysteries

IMAGES: The Lord's Prayer (1675) and the Angel (XVII) workshop are Pedro Roldán. The mystery is Lastrucci of 1948. the author of the Virgen del Rosario is unknown (XVI). The Lord and the Virgin was restored by Enrique Gutiérrez Carrasquilla (1994/1996).

MUSIC: Grouping Santa Maria de la Esperanza in Cross Guide, Musical grouping of Redemption in mystery and Band of the Red Cross in the Virgin.

PREMIERES 2022: The apostles premiere their robes. The four evangelists of the mystery baskets come out for the first time restored by David Segarra. Two sets of ancient rods of the brotherhood are recovered

PREMIERES 2019: The apostles premiere their robes. The four evangelists basket mystery step out for the first time marches restored Two new Band of the Red Cross: "St. Angela", Maria Luisa Palomares, and "Cover us with your mantle", Antonio Hernandez Lora, dedicated to the Virgin.

PREMIERES 2018: Restoration of decorative reliefs of the gussets of the passage of Lord of the Agony in the Garden at the hands of David Segarra. The musical group Santa María de la Esperanza, the Fraternitas Project in the South Polygon, It is released by opening the procession in front of the cross guide.

PREMIERES 2017: The three apostles of the mystery have been restored by Emilio López Olmedo. Mr, who chaired this year's Via Crucis of the Brotherhoods, It looks like that day his robe output recovered and enriched by José Ramón Paleteiro. Concepcionista new flag and development of the papal flag. It is the first Holy Thursday Elías Salamanca as foreman mystery step Montesión and the band of the Red Cross after the pallium.

PREMIERES 2016: The Virgen del Rosario comes after restoration at the hands of Pedro Manzano. Pass handle levers mystery. Guild held its annual quinario this January in the chapel after more than 60 years moving to other temples (while San Martin) for this purpose.

OBSERVATIONS: Popular brotherhood Street Fair that presents a very attractive mystery, alone which contains a natural olive. The Brotherhood maintains a style, classic and antique, It is seen in some badges, especially in its splendid cross guide, adorned with attributes Passionists. The pallium passage was the first to became transparent gold mesh. It is highly recommended rear view of the passage of the Virgin from which one can appreciate the clamp nut or collected mantle waist. Prayer in the mystery depicted in the garden, while Jesús reza, DISCIPLES fall asleep under an olive tree.

HISTORICAL FACTS: It emerged from the fusion of a guild del Rosario, established in the chapel of which emerge after the Convent Carmelite nuns Bethlehem, and one of penitential he formed in the Hospital of the Five Wounds. It is created by employers boat in 1560. In 1577 already resides in the Convent of Montesión, tilling own chapel, where it remains today.