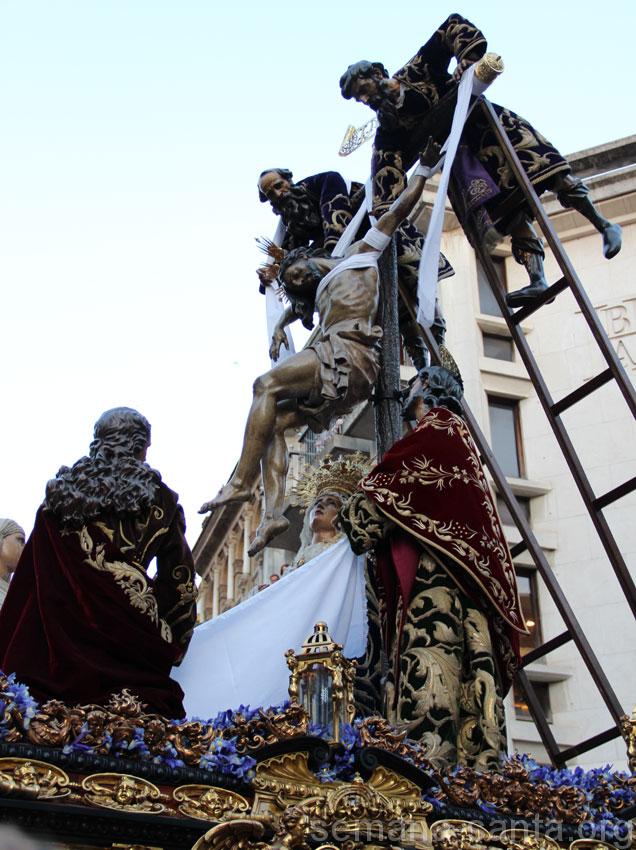 Pontifical and Royal Brotherhood and Confraternity of Nazarenes of the Holy Name of Jesus, Sacred Descent of Our Lord Jesus Christ and Quinta Anguish of Mary Our Lady

MUSIC: Chapel with group of singers.

CHARITY: Brotherhood collaborates with numerous organizations such as the Food Bank or the Pro Life Foundation, among other.

PREMIERES 2016: New flag Dulce Nombre de Jesus. Illustration of the new rules in the rulebook of the brotherhood, thus replacing the earlier of 1817.

HIGHLIGHT: Pass the basket and floral exornos, and the bending of the Christ of the Deposition and the gathering of the brotherhood. Cross Guide is the only one that is covered with tulle fabric.

OBSERVATIONS: Fifth Anguish is a brotherhood señera, which celebrates its penitential season with great recollection. With its sculptural group, It is representing the pathetic passage Deposition. Step, cast bronze, It stands for originality in every detail. The musical accompaniment imposes a special penitential atmosphere.

HISTORICAL FACTS:  The origin of this brotherhood is a merger of two ancient brotherhoods of penance: the Sacred Descent of Our Lord Jesus Christ and Quinta Anguish of Mary (founded in 1500 in the Convento del Carmen)  and Dulce Nombre de Jesus (founded in 1572). In ancient times also drew an allegorical passage in which Jesus El Niño Dulce Nombre, work of Jerome Hernandez, He blessed the attributes of the Passion. In 1581 They merge and canonical headquarters are established in a former convent chapel of St. Paul of the Church of Mary Magdalene, traditional seat of the corporation Dulce Nombre.