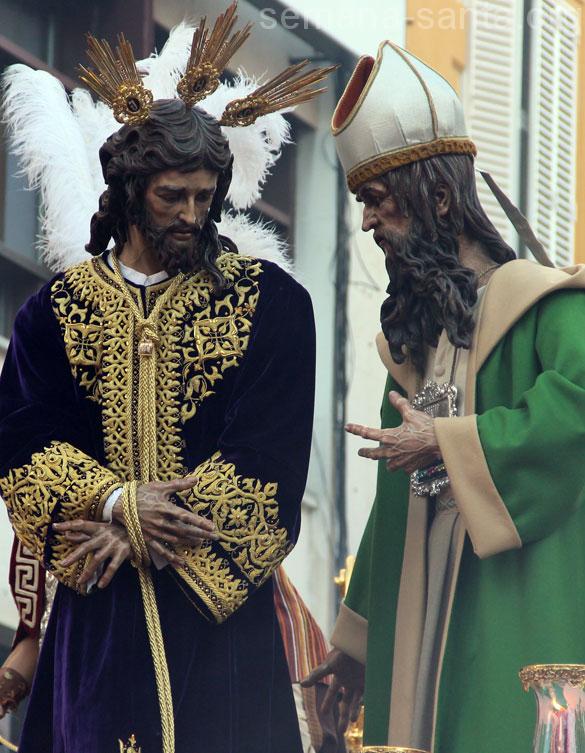 Pontifical and Royal Brotherhood of the Blessed Sacrament and Brotherhood of Nazarenes of Our Father Jesus of Sovereign Power before Caiaphas, Our Lady of Health and Saint John the Evangelist

embroidery: Palio of Fernandez and Enríquez designed by Guzmán Bejarano (1995-96).

MUSIC: Column and Whips band Cross Guide, The Cigar in mystery and Santa Ana de Dos Hermanas, in the Palio.

Social work: earmarks 42% of contributions to charity. It is the brotherhood that contributes most to the common fund diocesan. Collaborates with several charities.

PREMIERES 2022: Embroidered tunic for the Lord, made by Jose Librero

PREMIERES 2017: Antonio Bejarano debuts as dressing room of Our Lady of Health

PREMIERES 2016: Caiaphas image comes first restored by Pedro Manzano. Horn cloths designed by Javier Sánchez of the Kings and embroidered by Luis Miguel Garduño. Our Lady of Health will be canonically crowned in autumn 2017.

RECOMMENDED PLACES: The Barrio León and the Chapel of the Star.

HISTORICAL FACTS: It was founded by a group of teenage brothers and their first council constitution was held in 1942, year in which the new congregation is formed. He left for the first time 22 March 1948. In 1953 It merges with the Sacramental of parroquia.Han grown a lot in recent decades. Our Lady of Health was canonically crowned last 14 October 2017. It will be the first Easter Monday in which he will wear his crown enriched by Fernando Marmolejo for the occasion, and the skirt gold thread and silks, Embroidered by Jesus Rosado, which he premiered in autumn. Also they shine in all its glory the new ciriales, works of Jesus Dominguez; skirts, Past and rejuvenated by Jesus Rosado, who along with Orfebrería Maestrante set the script for the Coronation.