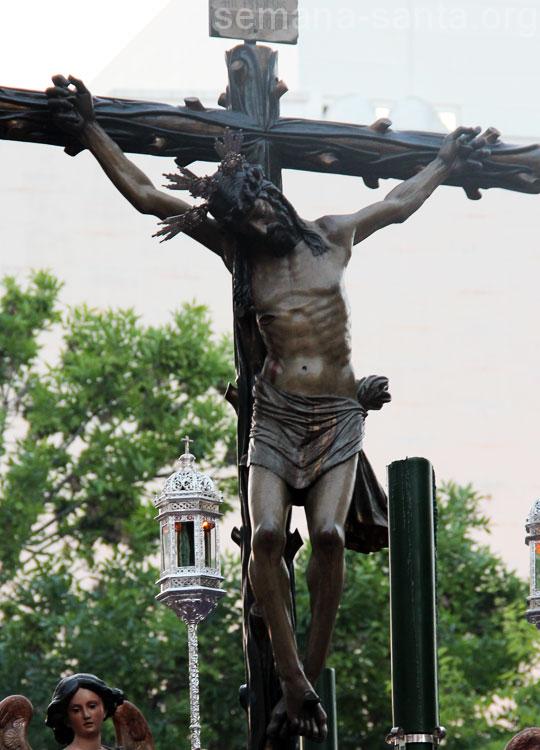 Very old, always Illustrious, Venerable and Pontifical, Real, fervent, Humble and Seraphic Brotherhood and Confraternity of Nazarenes of the Holy Vera Cruz, Blood of Our Lord Jesus Christ and Sorrows of Mary

IMAGES: The sculpture of Christ is anonymous sixteenth century, It is the oldest size that procesiona in Seville). the Virgin, Antonio Illanes (1942).

embroidery: Palio conducted by Sponsorship Lopez (1885). It belongs to the brotherhood from 1957.

Social work: Delivered daily, snacks to needy. It has delivered this year 20.000 Caritas euros, plus a check to COF Tomares. He 0,7% charity will be used to project Arise and walk Caritas St. Vincent.

Premieres 2022: New goldsmithing of the canopy passage of the Virgen de las Tristezas

Premieres 2018: Our Lady of Sorrows opens a silver crown by Joaquín Ossorio on the occasion of 75 anniversary of its workmanship and blessing. Dirk sterling silver repousse by the same goldsmith, who also restored the powers of Christ, dating from the nineteenth century. Six new candelabra step canopy in silver metal workshop Villarreal. A choral composition consisting of seven musical chapels dedicated to the brotherhood entitled "Stabat Mater Dolorosa", by David Alvarez Garcia.

Premieres 2017: première 12 stanchions for the passage of the Virgin, silver metal workshop Villareal. New hydraulic system for raising and lowering the image of the Holy Christ of Vera Cruz +, by Metalgen.

Premieres 2016: 12 stanchions in the passage of the Virgin made in the workshop of Villareal. Restoring chandeliers tail and play pitchers step pallium, and the censers courtship Christ. Three musical pieces: a diptych of Antonio Hurtado called "Lux in Tenebris"; and motets, “Oh Crux”, Francis of Assisi Manzanero, and a chapel entitled "Tristezas on Golgotha" for oboe, bassoon and clarinet Alberto Alvarez.

OBSERVATIONS:  The Vera Cruz is characterized by its penitential austerity. The Crucified is an ancient and remarkable effigy, smaller normal. It is a sober step, illuminated by four green hachones. In the Virgin they have recovered classic details, as the crown and headdress. All the brothers with crosses go after the cross guide. Participate representations of other brotherhoods of Vera-Cruz,with their robes. The image of Christ is the oldest of Easter. A nazareno the last stretch of Virgin takes a reliquary with the Lignum Crucis, piece of wood of the Cross of Christ, which can be kissed during Penitence Station.

HISTORICAL FACTS: This Brotherhood was founded in the convent Casa Grande de San Francisco de Asis de Sevilla, in 1448. During the centuries XV, XVI and XVII was one of the most important city. His life goes on 1924. After a period of inactivity, in 1942 a group of young, led by Antonio Soto Cartaya, decide to reactivate, San Alberto, recovering its original crucified, Returning to perform penance station 1944.