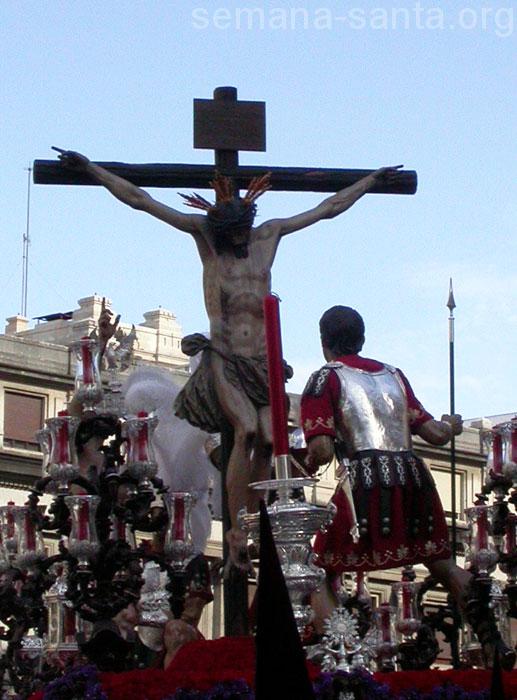 IMAGES: The image of Jesus is attributed to Ocampo (XVII), is the mystery of Miñarro (1988-89). The Virgin is Sebastián Santos (1955), restored by Ramos Corona.

Of interest 2018: Holy Tuesday wears a pectoral cross replica of the belfry of the temple and one of the candles candelería includes an allusive painting that anniversary. Soon will come a third step is carving Francisco Verdugo, the Nazarene of Humility, Juan Manuel Miñarro work (2006) which enjoys great devotion among the neighbors. It will occupy the first place in the processional courtship.

OBSERVATIONS: Queen Sofia, godmother was already Coronation, and is Camarera Honoraria of the Virgin. . The Virgin holds in her hand a handkerchief embroidered silk tulle s XIX, donated by a brother. The Brotherhood is on the street more than 14 hours. The clothing of the Romans passage of Mystery is the most similar to that worn by the Roman of that time.

RECOMMENDED PLACE: Back to Cerro.

HISTORICAL FACTS: In the Parish of the Cerro and around a statue of Our Lady of Sorrows is based on 1955 a brotherhood of glory. It merges into 1966 with the sacramental and 1987 It is approved as a brotherhood of penance, out for the first time at Easter the Holy Virgin of 1989.La Tuesday was canonically crowned in 2002 in the Cerro del Águila.