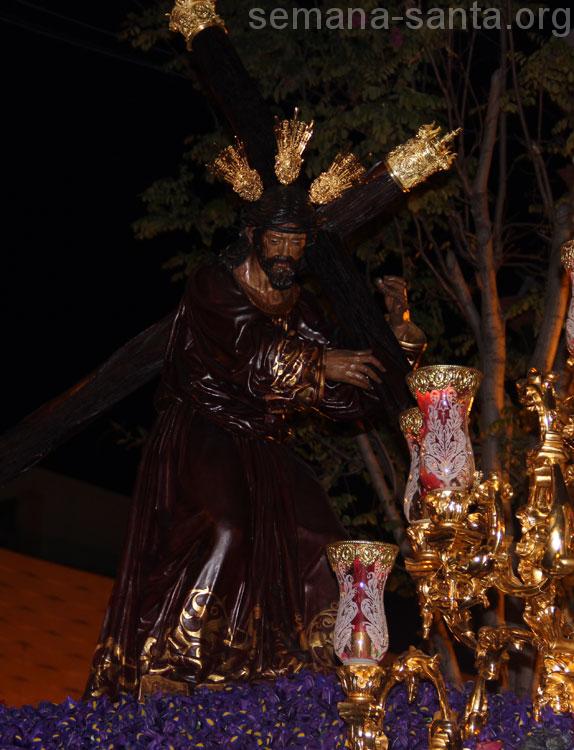 Illustrious and Fervent Sacramental Brotherhood and Brotherhood of Nazarenes of Our Father Jesus of Health, Virgin of the Candelaria, Our Lady of the Underground and San Nicolas de Bari

IMAGES: The Lord is anonymous carving of the seventeenth century (attributed to Francisco de Ocampo), restored 1997 in IAPH. The Virgin was carved by Manuel Galiano in 1924 and remodeled by Dubé de Luque 1967.

MUSIC: Holy Christ Youth Band of the Three Falls on the Cross of Guide, Three Falls at the Nazarene and the Virgin Red Cross.

Social work: They contribute to the commissary of the Casco Antiguo Foundation and help Caritas Parish. Collaborates with Autism associations Seville and Heart and Life. The latter pays attention to children with congenital heart disease.

Premieres 2017: Coattails of the first step. Pennant and band uniforms of the Blood of Christ, which meets 25 years and will put music to the mystery out of step. "Incarnation" is the new march of the Municipal Band of Puebla del Río dedicated to the Virgin. It was composed by Christopher Lopez Gándara

Data of interest 2018: One of the great moments of this Easter because of the new Holy Tuesday will be the passage of the Candelaria Murillo Gardens by afternoon.

HIGHLIGHTED PLACE: The passage of pallium by the Jardines de Murillo and around San Jose Street are two of the most singularres moments of Easter.

OBSERVATIONS: The Lord is an image somewhat smaller than usual. Size is competa and measures 1,30 m. La Candelaria has a very popular environment. Your pallium passage has a particular intonation with silver embroidery on a velvet blue-green color work of Rodriguez Ojeda. Participates a representation of the Cabildo de Tenerife for being the Virgen de la Candelaria patroness of the island.

HISTORICAL FACTS: This Brotherhood was founded in 1921  in the Church of St. Nicholas because of the devotion in the parish was a Nazarene belonging to the brotherhood of Gypsies. One year later, makes its first penitence to the Cathedral.