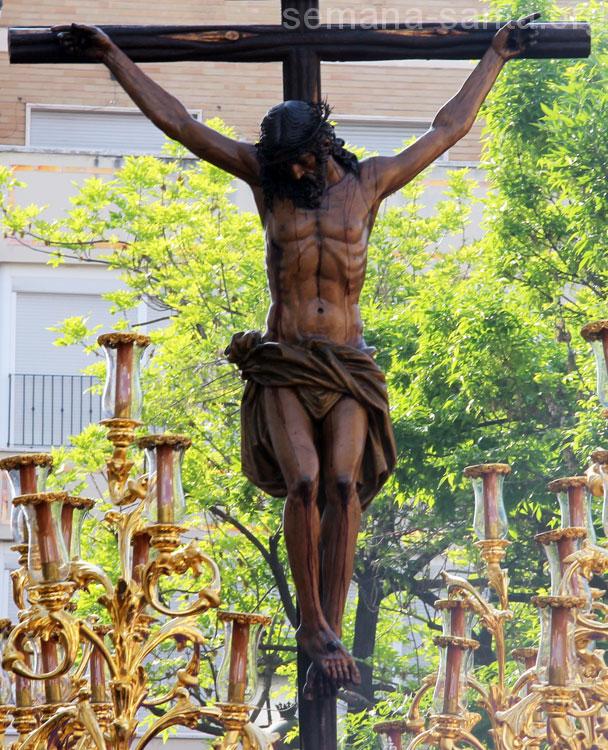 Nazarene Brotherhood and Brotherhood of the Holy Christ of Souls, Holy Mary of Grace and Amparo and San Francisco Javier

PREMIERES 2022: Does not have
PREMIERES 2018: Two cloths horn procession of the Virgin and past cloths Christ by Jose Ramon Paleteiro.
PREMIERES 2017: Embroidered cloths step Virgin horn. Restoring the tail candelabra that step.

PREMIERES 2016: An image of San Juan Evangelista, attributed to Jose Montes de Oca and recently adapted by Juan Manuel Miñarro, comes under pallium Our Lady of Grace and Amparo from this year. La Dolorosa out for the first time after its restoration by Esperanza Fernández. Manguilla for the cross raised in purple velvet with gold embroidery JHS by Francisco Javier Sosa. The brotherhood keeps going down the street Palacios Malaver and shortened by Fair from the Plaza de Montesión to enter before.

DATA OF INTEREST: A Nazarene carrying a relic of St. Francis Xavier. This year 2018 As a whole Holy Tuesday presents the novelty of the new route of the official race
conversely and the displacement of its usual time slot placing the penultimate day. Going through the Convent of St. Angela will be conducted on the way.

OBSERVATIONS: . It highlights the golden step of the Crucified, which it underwent restoration Miñarro. It is the first Cofradias in which women came nazarenas. And it is the first in which a woman is Big Sister. Virgin before going situated at the foot of the crucified and from 1980 leaves under pallium.

HISTORICAL FACTS: Formed largely by Marian congregants of Javieres Jesuit parish of the Sacred Heart 1946. Adopt their Rules 1955. the Virgin, before leaving at the feet of the crucified, procession under pallium from 1980.