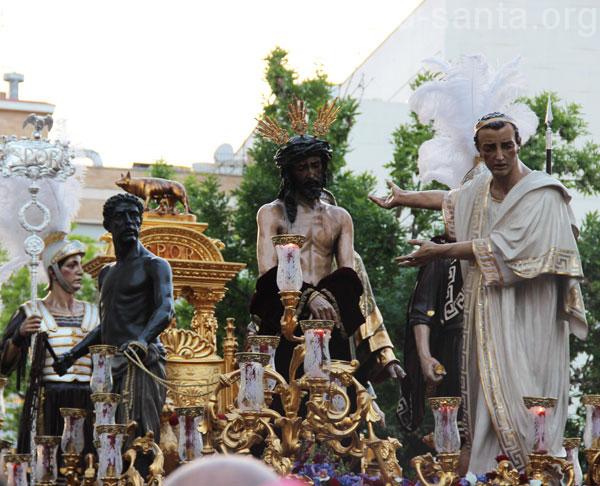 Brotherhood of the Blessed Sacrament, Pontifical, Royal and Ancient Confraternity of Nazarenes of the Holy Presentation of Jesus to the People, Holy Christ of the Blood, Our Lady of the Incarnation Coronada and San Benito Abad

Parroquia de San Benito (C / San Benito).
3 Steps (Presentation to the People, Christ of the Blood and Our Lady of the Incarnation)

IMAGES: The complete mystery is Lastrucci (1928). Blood Christ was carved by Buiza (1966). The Virgin is anonymous seventeenth century work.

MUSIC: grouping Ntra. Mrs. of the Incarnation in Mystery, Christ of the Blood in the Crucified and Municipal of Puebla in the Virgin River.

Social work: He works closely with the Sisters of the Poor and the soup kitchen of San Pablo.

Premieres 2018: Golden Cross guide and candelabra, the throne, the cauldron and the front of the rack passage of Holy Presentation at the hands of Manuel and Antonio Gilders. Parihuela that step, carpentry done in Melo.
Premieres 2017: Coattails of the first step. Pennant and band uniforms of the Blood of Christ, which meets 25 years and will put music to the mystery out of step. "Incarnation" is
the new gear of the Municipal Band of Puebla del Río dedicated to the Virgin. It was composed by Christopher Lopez Gándara

PREMIERES 2016: Persian-style tunic of the Presentation of the Lord. Purple and blue flags, restoration of sacramental pennant.

Of interest: The brotherhood will remain this year less time on the street: early departure 15 minutes, a position on the payroll of the day and enter one hour earlier than usual.

OBSERVATIONS: San Benito has established itself as the great brotherhood of La Calzada. It has three artistic steps and an outstanding set of badges. The mystery of the Presentation to the people is very popular, imaginera achieved with a composition. Our Lady of the Incarnation, beautiful image of the XVII, He was known as "flies Triana"

HISTORICAL FACTS: Its origins date back to 1554, when the first rules of the Brotherhood of the Holy Christ of the Blood and Our Lady of the Incarnation approved, based in the Monastery of Our Lady of Victory, Triana. In 1565 erects own chapel in the old cellar, which states up 1868, when ceases operations.  In 1921 It reorganizes and setting new rules headquartered in San Benito are approved.