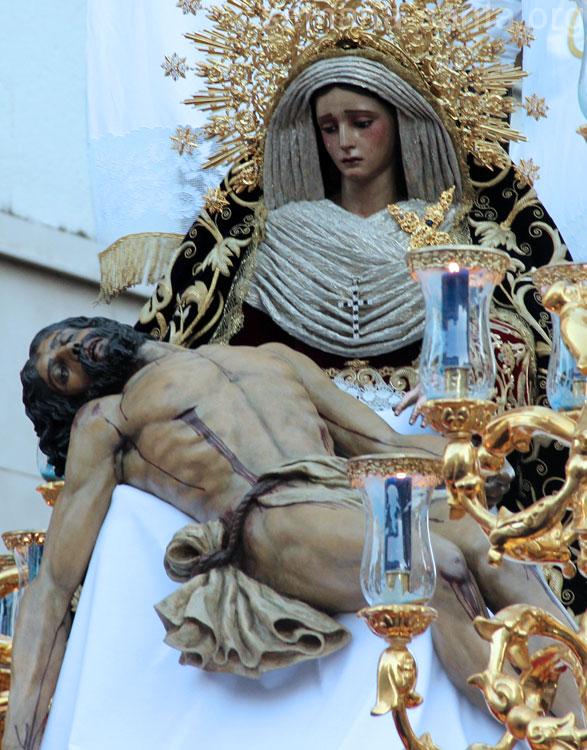 COATS: blue, tail, with buttons and red girdles in Christ, and white in the Virgin.

MUSIC: Youth Band in the Cigar Cross Guide, Bugles and Drums of the Sun in the Mystery and Carmen de Salteras in the Virgin.

PREMIERES 2019: Saya for Charity held a suit bullfighting Morante de la Puebla. Script for courtship mystery passage depicting the funeral of Lord of the main altar of the Church of Charity work of Pedro Roldán painted by Valdés Leal

PREMIERES 2018: Salen restored by Jose Angel del Valle and Victoria Fernández layette little angels step of Piety, Luis Alvarez Duarte works. The first step courtship incorporates a new logo: a script designed by Javier Sanchez of the Kings which contains the burial of Lord of the main altar of the chapel of St. George's Hospital Charity on one side and the slogan "Et Misericordia Tua Tua Semper Veritas Susceperunt" on the other. New rods presidency.

PREMIERES 2017: Our Lady of Mercy out for the first time after being restored by Juan Manuel Miñarro. The mantle of the Virgin of Charity will shine in all its splendor after its restoration in the workshop Successors Elena Caro, where it was originally made. New parihuela step of Piety

PREMIERES 2016: The Virgin of Charity will wear a mantle of Hope of Triana who designed Juan Borrero and his mantle is being restored.

OBSERVATIONS: The Baratillo joins the popular Arenal environment with classic forms cofradieras. It maintains links with the bullfighting scene, since the chapel is next to the Plaza de la Real Maestranza, where they form sections of Nazarenes of the brotherhood. It is very remarkable his golden step. In step pallium you can see two angels dressed in a cloak toreros.

HISTORICAL FACTS: The origin of this brotherhood dates from 1693, and is due to site (Baratillo) where, in the early seventeenth century, Cerrajeria there was a cross on the brick base who worshiped the residents of that area. In 1894 It reorganizes with penitential. In 1904 It makes its first penitence time on Holy Wednesday.