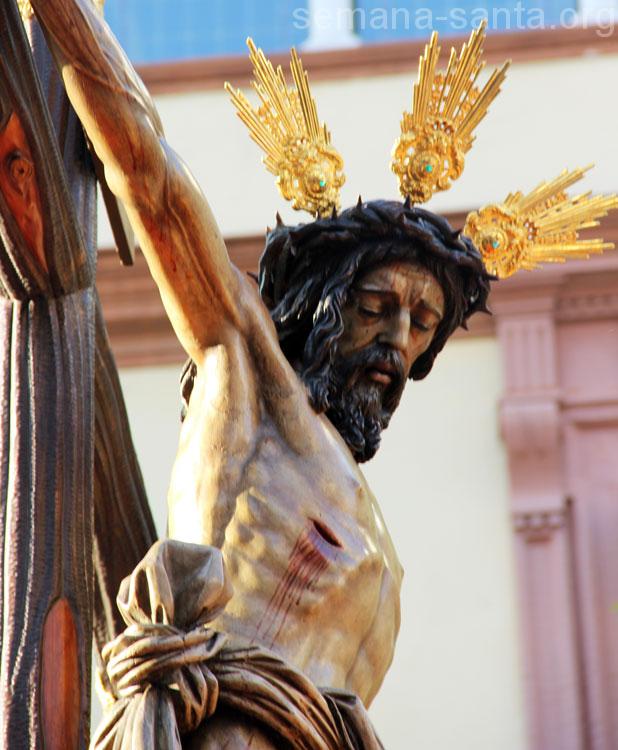 MUSIC: Centuria Macarena in Christ and Nevis, Olivares, the Virgin.

Premieres 2022: Restoration of the canopy ceiling by the IAPH, new skirts for the passage of the canopy in blue velvet under the design of Javier Sánchez de los Reyes and embroidered by the workshop of the
sisterhood; new skirt in crimson velvet for the Virgen de la Palma, work of Rafael Díaz Molina and Manuel Jesús Corral Zambruno for the cults.
Premieres 2019: The Cristo del Buen Fin comes after the restoration and cleaning which was submitted after last Easter in the Andalusian Historical Heritage Center.

Premieres 2018: The new headquarters of the Center for Early Stimulation, a pioneer in the treatment of children. Currently they are serving some 350. Also new last step of the skirts of Christ.

Premieres 2017: sacramental banner embroidered in gold on silk damask in the workshop of brotherhood to a design by Manuel Jesús Corral Zambrano. Rods to President Santos embossed by Orfebrería.

PREMIERES 2016: Parihuela step pallium. Centuria march "A life behind you" of Francisco Moraza Cienguegos. Centuria Macarena meets 25 years after the passage of Cristo del Buen Fin. Thus, Armaos of the Macarena visit the church of San Antonio in the evening of Holy Thursday.

Of interest 2018: They will draw ahead of the passage of Christ one répilica the Holy Shroud of Turin, holder of the brotherhood.

OBSERVATIONS: closely linked with the Franciscan brotherhood, fact is seen in their robes. When suppressing the figures of the mystery this guild is considering adapting the way to the image of the crucified. The canopy of the Virgen de la Palma has very original embroidery. Procesiona Christ alone in the passage from 1998, when the mystery suppressed Alvarez Duarte. This Brotherhood is accompanied by a choir singing during the tour.

HISTORICAL FACTS: It was founded in 1590 by the guild of tanners in the Church of San Juan Bautista (San Juan de la Palma). In 1605 he moved to the Convent of San Antonio de Padua. It recasts in 1883 in its current temple, but you have to leave San Pedro. After several attempts to renew, He reorganized in 1908 as we know it today. It had a single step to 1930, which contained, with the Lord, Marias, San Juan and La Virgen. In 1923 It opens the current step of Christ and 1930 The pallium passage.