Carmelita Brotherhood Wonderland Mary and Brotherhood of Nazarenes of Our. Father Jesus of Peace and Our. Mrs. del Carmen in their Sorrowful Mysteries 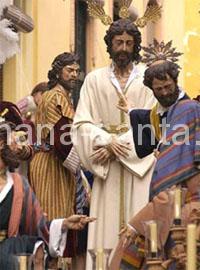 IMAGES: Christ is José Francisco Reyes Villadiego 1990. The same artist carved images of San Pedro, a Roman centurion and the prosecution raised in 1997; Joseph of Arimathea and sayón in 1998, the servant and another Roman in 1999 and San Juan Evangelista in the year 2000. The image of the Virgin was made in 1984 Francisco Berlanga

MUSIC: After the Mystery will go the Pasión de Linares Musical Group, after the canopy the Municipal Band of Aznalcollar

Premieres 2019: The Lord opens an embroidered tunic embroidered cloth of gold on silver by Manuel Solano to a design by Francisco Reyes Villadiego. Donated by a group of brothers.

Premieres 2018: The Lord of Peace opens a set of powers in sterling silver, Villarreal Orfebrería work.

Premieres 2017: Moldurón for the passage of mystery carved by José Carlos Light and gilded by David Peace, of hanging a new vents combining mesh and velvet. The pallium passage take four new pitchers designed and tooled the goldsmith José Manuel Bernet. Four new marches that expand the repertoire of the Municipal Band of Aznalcóllar.

PREMIERES 2016: Dorado front vent and cut the sides and rear of the passage of mystery, Obra de Ssergio famine, with heads of angels polychrome and casseroles by Jose Maria Leal. Game censers and naveta Virgin Courtship, and speakers. Retards both its output as its input 15 minutes.

Of interest 2018: The brotherhood plans to address a profound transformation of step pallium on the line of aesthetic renewal, closest to the Carmelite identity, they are rushing in their heritage. To do intend to use as a support for embroidery brown velvet, tissue silver and gold tinsel. The brothers are summoned to an extraordinary council the 19 June to approve the project and its financing.

HISTORICAL FACTS: Its origins date back to 1982, when Sevillian young Christians who were doing military service in San Fernando decide to join a group of devotees and worship the Virgen del Carmen. It was not until 1995 when its first rules were approved as brotherhood of Nazarenes. And for the first time in Easter 2007. In step Mystery there is a rooster representing negations of San Pedro Jesus : Before the cock crows twice, you will deny me three times”. The motto of the brotherhood is: To Jesus through Mary.