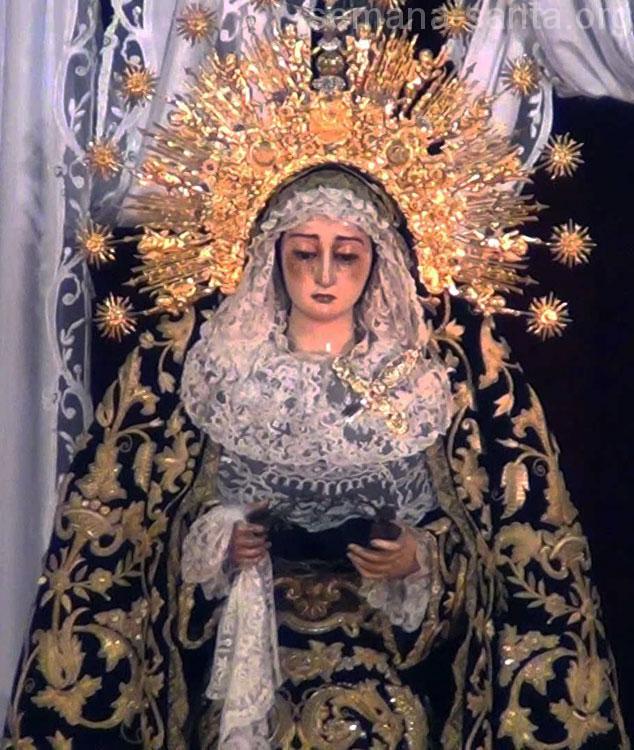 Pontifical and Royal Brotherhood Sacramental of Our Lady of Rock-Amador, Animas Benditas, Beato Marcelo Espinola and Primitive Brotherhood of Nazarenes of Mary in Soledad

IMAGES: The Virgin is anonymous work of the sixteenth century, although it attributed to Velardi. It may be the oldest Dolorosa that procesiona. The step was released in 1951 design by painter Santiago Martinez.

PREMIERES 2016: Salen restored the 4 Angels corners of the pass and the script charity.

HIGHLIGHT: his lighting, original and large, chandeliers in the corners that are born in the bottom of the basket, as well as lanterns and classical candelería, executed in sterling silver by goldsmith Manuel Seco Velasco.

RECOMMENDED PLACE: Are typical arrows to entry especially one that defines loneliness as “finale closes the Easter”.

OBSERVATIONS: Solitude is a brotherhood of great solera, deeply rooted in the historic neighborhood of San Lorenzo. This image could be the oldest Seville Dolorosa and the first that came under pallium.

HISTORICAL FACTS: This Brotherhood was founded in the sixteenth century. He passed the Convent of Santo Domingo de Silos, the Hospital del Amor de Dios, the Church of Santiago de los Caballeros and the Casa Grande del Carmen Shoes, compass whose own chapel built in 1584. In this chapel lies to 1810, when it was destroyed on the occasion of the French invasion, passing the parish church of San Miguel. In 1868 he moved to its current location. The old rules of the brotherhood of Solitude have appeared in the documentary Villanovs University of Philadelphia, in the state of Pennsylvania (U.S). It is a manuscript text, who left Sevilla and ended up in the Convent of the Society of the Holy Child Jesus in 1883. The Brotherhood is closely linked to the Royal Cavalry of Seville.