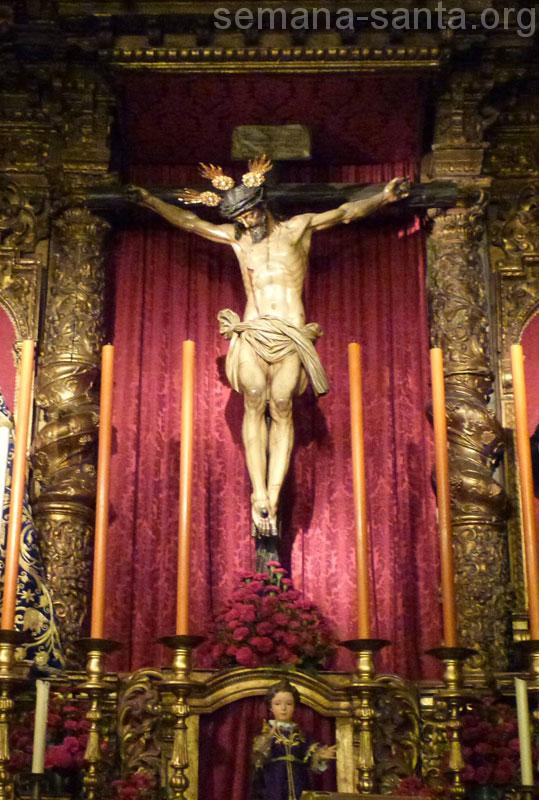 IMAGES: Crucified is the size of Francisco de Ocampo (1612). The Virgin is attributed to Juan de Astorga (1845).

MUSIC: no leads. His images are honored with a multitude of arrows along its route.

PREMIERES: You will leave through the door of the parish of La Magdalena that leads to San Pablo street and will go through Bailén streets, San Pedro Martir, continuing along the usual route

PREMIERES 2019: Falls step pallium of Our Lady of the Presentation have been restored by Jesus Rosado Borja.

PREMIERES 2017: Coattails of the pallium, Cap by José Ramón paleteiro, Worship with Velasco design in line with the pallium and mantle of Juan Manuel Rodriguez Ojeda. valances, embroidered in gold thread on burgundy velvet, They inspired by the roof canopy. Jesús Rosado embroidered flag reminiscent of the relationship with the parish of the Magdalena and replaces the script of Redemption.

RECOMMENDED PLACE: In Postigo. The dawn of Good Friday at St. Paul before the Virgin is a breathtaking moment.

OBSERVATIONS: Calvary is one of the most austere brotherhoods, is impressive passing in the official race between the two Hopes. Candelería his pallium is the most populous few procesionan. Nazarenes, alpagatas that fit with soled instead of the usual shoes or sandals, fulfill their station in total silence, with great penitential rigor. The passage of Christ was designed by Francisco Farfán Ramos (1908), Inspired by the Great Power, but in mahogany and four hachones. It boggles your crunches in the silence of the morning.

HISTORICAL FACTS: It was founded in the Hospital of Our Lady of Bethlehem in 1572. For a long time they were known as the Brotherhood of the Mulatos (by race of its founders) or Presentation. In 1886, after extinction, It was founded as we know it today in San Ildefonso. In 1908 he moved to San Gregorio. In 1916 when it sets in the Parish of the Magdalena. The image of Christ received worship in St. Catherine and the Convent of San Francisco Casa Grande, in the current Plaza Nueva.