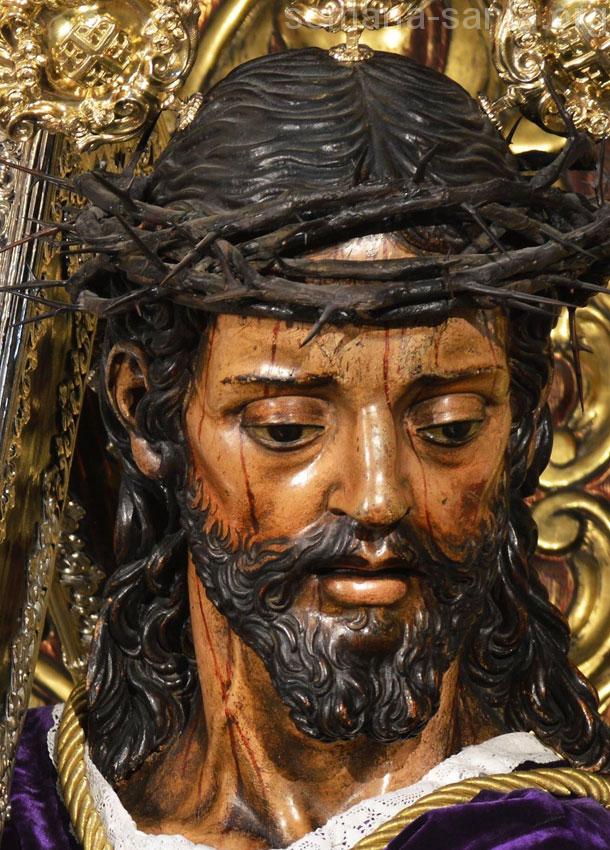 Primitive Brotherhood of Nazarenes in Seville, Pontifical and Royal Confraternity of Our Paadre Jesus Nazareno, Santa Cruz in Jerusalem and Our Lady of Conception

IMAGES: Nazareth is the work of Francisco de Ocampo workshop (1609). The Virgin left the workshop Sebastián Santos (1954). The image of San Juan is Christopher Ramos (1752).

MUSIC: Trio Musical Chapel in the two steps that interpret compositions or saetas eighteenth century dedicated to Jesus Nazareno and other composed by J.A.. Pedrosa to Our Lady of Conception.

RECOMMENDED PLACE: The exit, in the dark. For any site that happens impress your recollection.

OBSERVATIONS: When leaving Cross Guide will sing the saeta “Silence Christian people….”. It is known as "El Silencio", for his penitential rigor and composure. So much so that for seeking leave to enter official race, They do it in writing in a sealed envelope. The Nazarenes always look forward and do not speak all the way. Penitents carry their crosses as the Nazarene, reverse the usual.

HISTORICAL FACTS: The first news of this cofracía dating 1340, when a group of faithful Primitiva founded the Brotherhood of Nazarenes in Seville, en la Iglesia de All Saints, to reflect on the chapters of the Passion according to the Gospel of St. John. Nevertheless, his first rules are not approved until 1564. In 1572 he moved to the Convent of San Antonio, where its own chapel located in 1615.