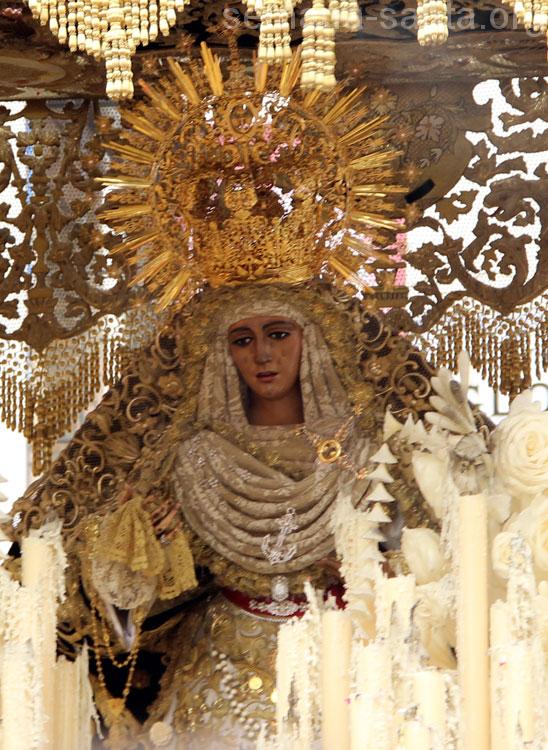 Pontifical, Real and Illustrious Brotherhood and Confraternity of Nazarenes of the Blessed Sacrament and the Pure and Clean Conception of the Blessed Virgin Mary, the Holy Christ of the Three Falls, Our Lady of Hope and San Juan Evangelista

Mariners Chapel (C / Purity).
2 Steps (Holy Christ of the Three Falls and Our Lady of Hope)

COATS: In Christ, tunic and purple velvet mask and the Virgin, verde. Layer is white in two steps.

MUSIC: San Juan Evangelista in Cross Guide. Three Falls band in Christ and the Virgin of the Victory in the pallium.

PREMIERES 2022: A scarlet skirt embroidered in gold by Francisco Carrera Iglesias and for the Lord a purple tunic embroidered by Jesús Rosado. Both pieces have been designed by Javier Sánchez de los Reyes.

PREMIERES 2019: The Virgin looks for the first time after its restoration in the workshop Esperanza Elena Caro Successors of the saya of Olmo. Hope Scripted, Josefa Malla work, Lourdes Hernandez and Santos Orfebrería to a design by Javier Sánchez de los Reyes. Restoration plays Benjamin Perez exit at the hands of Mariano Martín Santonja.

PREMIERES 2018: Christ comes for the first time after the restoration that has been practiced Pedro Manzano. Virgin take the mantle of dragons work workshop Caro. That of BorreroseexpondráenelAyuntamiento. Enunosmesesel Caro workshop will deliver a new saya inspired that gave the bullfighter Juan Belmonte

PREMIERES 2016: side and rear skirts step of Christ and Simpecado. It has a new section in the procession of Christ (seventh) and a new logo on the Virgin with a relic of John Paul II you can kiss, accompanied by two lanterns. Restoration rods presidency.

OBSERVATIONS: La Esperanza de Triana has a great devotion, not only in the neighborhood of Triana. The Virgin goes in triumph along its entire length, but the morning of Good Friday in Triana is simply magical. The Lord saw smooth purple velvet robe and the Virgin, saya Martin Cruz sisters (1968) and the cloak of Juan Borrero made by the workshop Heirs of Elena Caro (1994) and touches of sobremanto of the Sisters of Martin Cruz 1968. Callers steps have marine motifs and the Virgin holds in her hand a lifeline. To this brotherhood is known as the Mariners. And the Virgin as Queen of Triana. In his tour he is accompanied by a representation Army Navy. The brotherhood is overturned in a program for unemployed brothers and the Center for Child Support Hope of Triana for children with ADHD (attention deficit hyperactivity disorder).

HISTORICAL FACTS:  Linked to the Triana district from its origins, Brotherhood of Our Lady of Hope was founded by the union of ceramists in 1418, at the Royal Parish of Lady Santa Ana. In 1542, It merges with the Brotherhood of St. John the Evangelist who belonged to the guild of fishermen. In 1616 It joins the Three Caidas. In 1962 he moved to the Chapel of the Mariners.