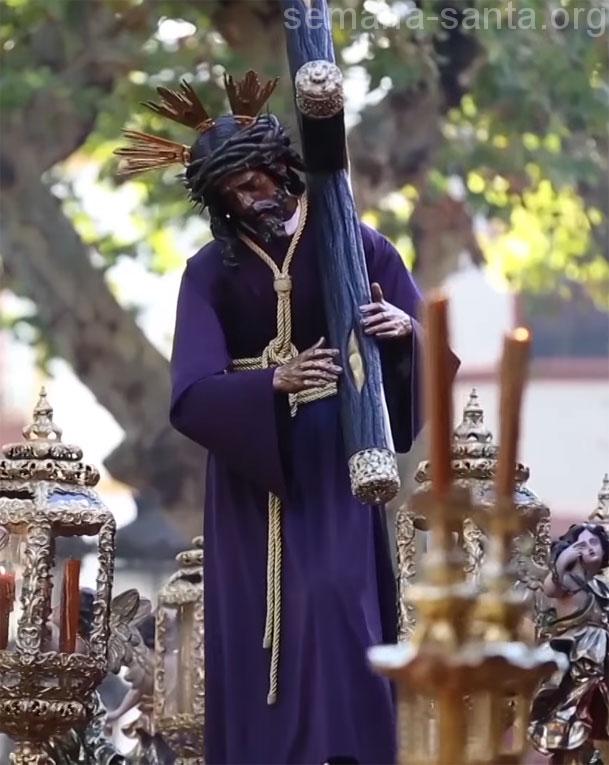 Pontifical and Royal Brotherhood and Brotherhood of Nazarenes of Our Father Jesus of the Great Power, and the Virgin of Suffering and Transfer

PREMIERES 2022: Last November it was possible to contemplate the Lord with the Robe of the Devotees in the procession extraordinary return from the Cathedral to its basilica, designed
by Francisco Javier Sánchez de los Reyes and carried out by the Santa Bárbara workshop

PREMIERES 2019: Golden lanterns passage of the Lord in the workshop of Marmolejo, which also they have golden rods presidencies of both steps.

PREMIERES 2018: Entrevarales four decanters of sterling silver that reproduce Jorge Ferrer. They are works of Hermanos Marmolejo, who they are also restoring the corners of the cross output of the Lord, from 1861. They will again be golden and lost over the years amethysts answers.

OBSERVATIONS: The Great Power performed his penitential season ejemplaridad. It is the Sevillian brotherhood that brings greater number of penitents. The town professes an immense devotion to Lord called Seville. It is striking to see the Great Power at dawn. The passage of the Lord is the oldest. It has three magnificent embroidered robes for the Lord, that used in worship, but not in the output, since the leads smooth. One such robes, Thistles the nineteenth century, has just been restored. Charity Bag, one of the emblems of brotherhood, It is the oldest corporations sevillanas. Since its inception, He has handled more than 10.000 applications (2014).

HISTORICAL FACTS: The Dukes of Medina Sidonia founded the brotherhood in 1431 in the Abbey of Santo Domingo de Silos, Today the Parish of San Benito. After passing through the convents of Santiago de los Caballeros and Valley until, in 1703, It was established in the parish of San Lorenzo. From there he moved to today is its temple in 1965.