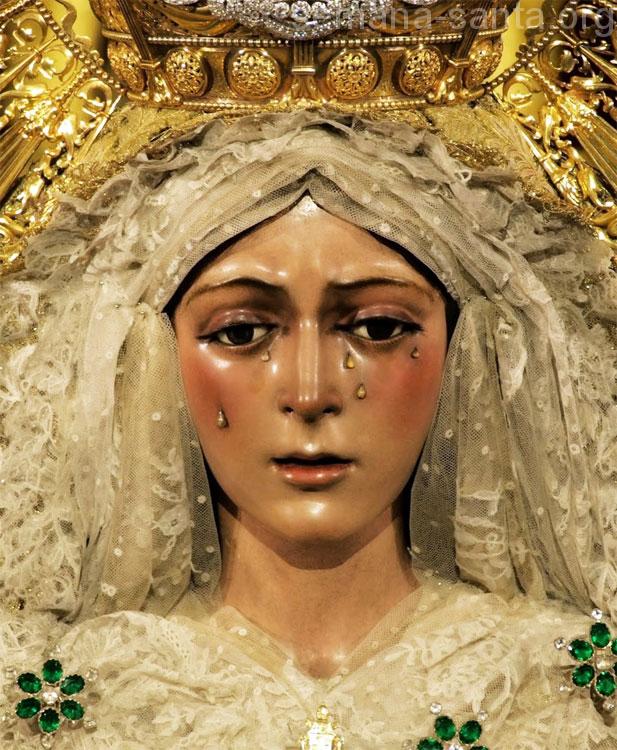 Real, Illustrious and Fervent Brotherhood and Brotherhood of Nazarenes of Our Lady of the Rosary, Our Father Jesus of the Judgement and the Virgin of Hope Macarena

Basilica of the Macarena (C / Becquer).
2 Steps (Judgment of Jesus and Our Lady of Hope).

IMAGES: The Christ of the Judgement is Felipe Morales (1654).The mystery of Lastrucci (1929), Roman least that was made by Alvarez Duarte (1978).The Virgin is anonymous carving (XVII century)

COATS: white, layer, with purple velvet mask in the Lord and in the Virgin Green.

MUSIC: Youth of Centuria Romana Cross Guide, Band of Bugles and Drums of the Centuria Romana in mystery and Philharmonic Society Nuestra Señora del Carmen de Salteras in the Virgin.

PREMIERES 2022: The Virgin of Hope will come out this year with the newly released Mantle of the Coronation.

PREMIERES 2019: Reorganization of the stretchers of both steps, removing a Trabajadera in each.

PREMIERES 2018: Brotherhood premiere tour around the Cuesta del Rosario and Alfalfa. For the first time a children's section will draw especially assisted. Redevelop is just around the Basilica peatonalizada creating a plaza in front of the gate that leads to the temple. NocruzaráelArcotraslasalida.

PREMIERES 2017: Our Lady of Hope, who will wear the mantle called mesh or camaronero, saya launches a rose called "tributes" that has been embroidered by Jesus Arco as designed by Álvaro Abril. Embroideries pallium shining out after the restoration carried by the successors Workshop Elena Caro, where were made between 1962 Y 1965 according to design Ignacio Gómez Millán. Restoration of the four angels of Luis Ortega Bru listed in the corners of the passage of Lord of the Judgment at the hands of Carlos Peñuela.

PREMIERES 2016: Cleaning the scenes of the pallium.

RECOMMENDED PLACE: Just around his neighborhood.

OBSERVATIONS: La Macarena has enormous popularity, thanks to the universal devotion to the Virgin. Although the brotherhood takes a long time to pass, It is advised to see in detail all the processional courtship. It involves, after the passage of the Judgment, the "arm yourselves". The Mystery represents the moment when Pilate washes his hands, as a sign of not taking responsibility before the condemnation of Jesus.

HISTORICAL FACTS: The ruined Convent of San Basilio was the site of foundation of this brotherhood. It was founded by hortelanos. His first rules were approved 1595 as Brotherhood of Our Lady of Hope. Make first season of penance in 1624. In these early years, procesionaba brotherhood with the image of a crucified, by Pedro Nieto, and mourning of the Virgin of Hope. In 1670 he moved to San Gil and later to its current Basilica.