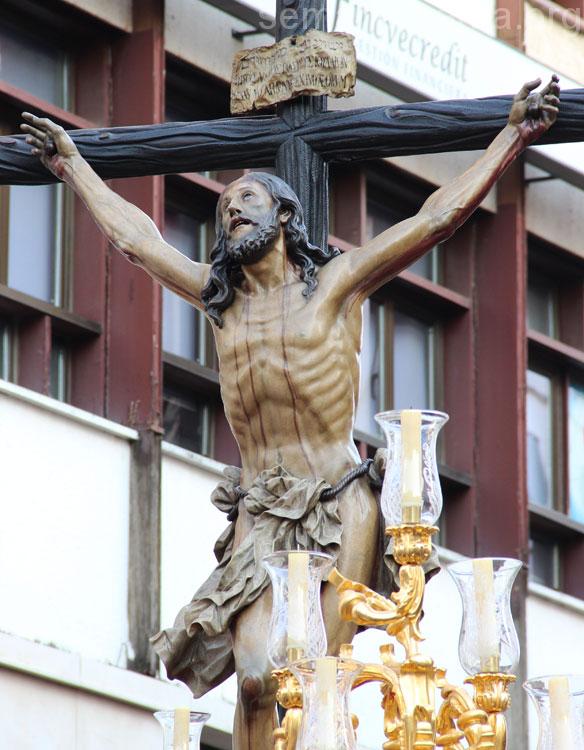 Pontifical, Real and Illustrious Brotherhood and Brotherhood of Nazarenes of the Holy Christ of the Expiration and Our Mother and Lady of Patronage

IMAGES: The Crucified is Francisco Antonio Ruiz Gijón (1682). The Virgin was carved by Alvarez Duarte (1973), previous inspired, disappeared in a fire.

MUSIC: Holy Presentation of Dos Hermanas in Christ and Oliva, Salteras, in the Palio.

PREMIERES 2022: Reform of the passage of Christ by José María Leal, advised by an artistic commission, to get a better view of the crucified. Windshield sconces have been replaced and much of the silver has been removed from the basket, placing images
carvings of the four evangelists, as well as of the fathers of the church in the corners. new skirts, work of Francisco Carrera Iglesias.

PREMIERES 2018: The council of brothers has approved this February reform passage of Christ according to the draft submitted by the degree in Fine Arts and sculptor Jose Maria Leal, supported by a group of professors and experts in heritage. The reform is to act on the candelabra and corners of the step to better align the structure of the basket with the crucified. This project will be completed with new fladones whose project is Francisco Carrera Iglesias.

PREMIERES 2017: Mediatrix restoration workshop at the hands of Santa Barbara.

HIGHLIGHT: Cross Guide tortoiseshell and their lanterns, the years of Senato and speakers, embroideries inspired pallium, as the standard. Another remarkable detail is the sinelable and mediatrix. In June 2012 the temple was consecrated as a basilica.

OBSERVATIONS: The archbishop has ordered the Basilica del Cachorro to profit from the plenary indulgence in the Year of Faith. The puppy has a great devotion throughout Sevilla. It is a masterpiece of Baroque. It will be in Besapiés Easter Sunday. The Virgen del Patrocinio has no tear. The first step represents the moment of the expiry, last breath of Christ. This brotherhood is known as “The puppy” because it is said that the sculptor modeled Christ for a gypsy, nicknamed the Pup, at the time of death after a fight.

HISTORICAL FACTS: The Brotherhood comes from the merger, in 1689, two old trianeras corporations: the Holy Christ of the Expiration and Our Lady of Patronage. This last, stocks whose data are known a century even further back, It could also come from the remote of Our Lady of the Rosary or the Caves.