Pontifical and Royal Confraternity of Nazarenes of the Holy Christ of Health, Virgin of the Light in the Sacred Mystery of its Three Needs to Pie de la Santa Cruz, San Francisco de Paula, Glorious Resurrection of Our Lord Jesus Christ and Our Lady of Suffering in Soledad 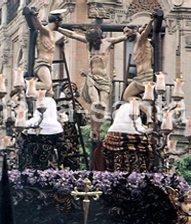 PREMIERES 2019: Saya Blue Delivery of Our Lady of Suffering in Soledad, Antúnez work of the Sisters of the late nineteenth century, He shines in all its splendor after the restoration process devised by Gonzalo Navarro who has been subjected by the embroiderer Manuel Solano. New wooden bier step pallium executed in the workshop of Ramón Jiménez Roldán after a detailed study of the loads in the season of penance in order to improve functionality in the new part.

Premieres 2017: saya embroidered in gold for the Virgin of Suffering in Soledad, donation of a Sister

HIGHLIGHT: Cross Guide, mahogany and silver, the oldest of Holy Week in Seville, and dating 1700. Pass candelabra wrought iron mystery, They are also the oldest of our Easter (1844).

OBSERVATIONS: Carretería maintains an inherited nineteenth-century style. It is a brotherhood that preserves details of the Easter old, like blue velvet robes. The group misterio, with his Calvary on a high acanthus leaf litter basket, very complete, It is considered among the best in Seville. It is a brotherhood of romantic style. His Nazarenes wear one of the elephants robes Easter. He has spent two years without leaving rain (2012 Y 2013). This brotherhood has the oldest processional march of Easter: carreteria.

HISTORICAL FACTS: The origins of this brotherhood back to 1550, when Pedro Luis de Chipiona, Guild official coopers, he found an image of the Virgin in a culvert near the river, possibly the Arroyo del Tagarete, in a place known as flues of Carreteria. Today the picture is the current Virgen de la Luz Gloria. It was founded in the Hospital of San Andrés. In 1761 he moved to his current chapel Arenal neighborhood.