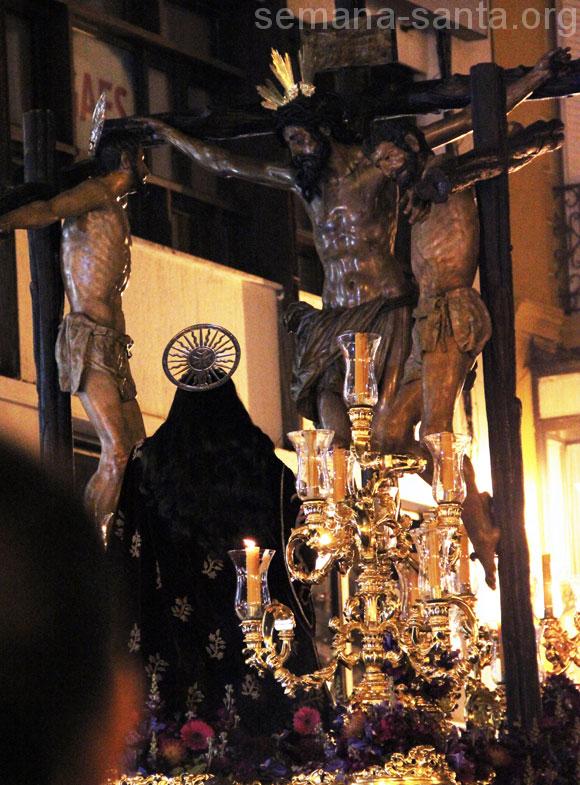 Pontifical, Real, Ilustre and Antigua Brotherhood and Brotherhood of Nazarenes of the Holy Christ of the Conversion of the Good Thief and Our Mother and Lady of Montserrat

IMAGES: Christ is the work of Juan de Table 1620. The two thieves were carved by Pedor Nieto (1628). Magdalena is anonymous work of the XVIII. the author of the Virgin is unknown, which it was made in the seventeenth century although it is attributed to Gaspar de la Cueva and finished in the workshop of Martinez Montanes.

MUSIC: Three Falls in Christ and the Virgin Tejera.

PREMIERES 2018: Veronica cloth has been painted by Francisco José García. The brotherhood has carried out a major reshuffle in his chapel, specific, rehabilitation of the interior rooms of the corporation to facilitate the life of the brothers

PREMIERES 2017: The image of St. María Magdalena out for the first time after having been restored by Rocío Millán Sáez. embroidered cloths horn Cross guide opens, carried
out by the embroidery workshop of brotherhood own.

OBSERVATIONS: Montserrat lived its golden age in the nineteenth century, supported by the patronage of the dukes of Monpensier. Since then it retains a stately and romantic style. Christ is an outstanding work of Juan de Mesa. Allegories out in his courtship of Veronica and Faith, incarnated by the senoritas. Woman Veronica wiped the sweat from his face the Lord with a canvas or cloth and which was the imprint of his face “La Santa Faz”.

HISTORICAL FACTS:  The origin of this brotherhood lies in the devotion and worship of the Blessed Virgin of Montserrat residents who maintained the Catalans in the city for trade with India. Data on their age range from late fifteenth century and the late sixteenth century. Nevertheless, his first rules like Brotherhood of penance were approved 24 April 1601. In 1650 He moved to the Convent of San Pablo where he held a chapel itself. The current belonged to the former Brotherhood of Antigua and Seven Sorrows.