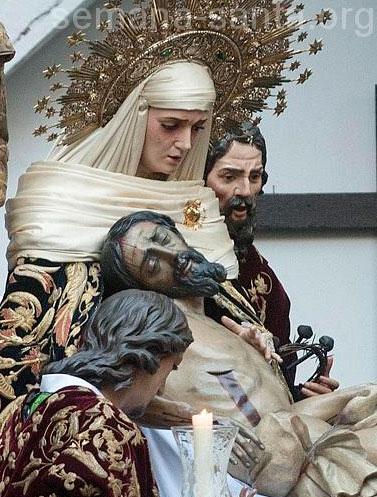 Photo: Brotherhood of the Holy Shroud

Antigua, Real and Illustrious Brotherhood and Brotherhood of Nazarenes of Our Father Jesus Descended from the Cross in the Mystery of the Holy Shroud and Mary of Mercy

Peace Convent (C / Bustos Tavera).
1 paso (Jesus down from the cross and Our Lady of Mercy).

IMAGES: The image of Jesus is Christopher Perez (1667).  The rest of the Mystery, including Virgin, It is attributed to the workshop of Roland (XVII century).

RECOMMENDED PLACE: Back by Bustos Tavera. And their entry into the compass of the old Convent of La Paz is among one of the most impressive moments of Easter.

OBSERVATIONS: The Holy Shroud takes a penitential procession which was revived in the eighteenth century as the beadle, that rings a bell with double funereal cadence to announce the arrival of the brotherhood,  above the cross of enagüillas, -number eighteen people ciriales, according to a pious tradition, They attended the burial of Christ- and the acolytes after step. The sculptural group, one of the best in Seville, It represents the pain of Mary and her companions for the death of Christ, after being taken down from the cross.

HISTORICAL FACTS: The origin of this brotherhood lies in the XVI century, when it happens the appearance of an image of Mercy in mud in a hole in the Torre de Santa Marina. By devotion to her, curiales and scribes founded this brotherhood. He acquired chapel in the church of Santa Marina, which it was burned in 1936, although the images were saved because they were not there. Shortly afterwards he settled in the former Convent of Peace, where today are worshiped their holders. After that transfer, the brotherhood acquired the current sober spirit, other than above, so popular and neighborhood that was dubbed the Macarena Girl.