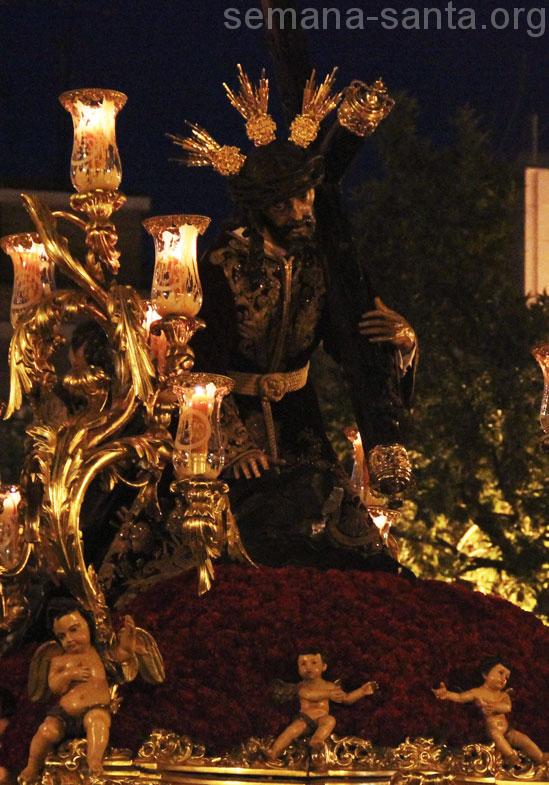 Antigua and Illustrious Brotherhood of the Blessed Sacrament and Pontifical and Royal Confraternity of Nazarenes of Our Father Jesus of the Three Falls, Our Lady of Loreto and San Isidoro Mr.

IMAGES: The carving of Christ is Alonso Martinez (1668) retouched in 1928 by Francisco Marco Diaz-Pintado and Manuel Gonzalez Santos. Francisco Antonio Ruiz Gijón (1688), He made the image of Cyrene. The Virgin is anonymous eighteenth century work, amended by Sebastián Santos, 1955.

PREMIERES 2018: Caller step of Christ, tooled by Jesus Dominguez. This is a donation from the family Sánchez Hoyos.

PREMIERES 2017: Caller step of Christ, tooled by Jesús Domínguez. This is a donation from the family Sánchez Hoyos.

PREMIERES 2016: Our Lady of Loreto out for the first time after restoration. New parihuela step pallium.

HIGHLIGHT: The Brotherhood of St. Isidore maintains close ties with the Air Force, which annually goes with her employer in the Good Friday procession. Our Lady of Loreto carries in his left hand a small plane gold, which reproduces the silhouette of the Plus Ultra. El Cirineo, the same author as the Puppy, It is considered the best ghosting Easter. Pallium embroideries, designed by Francisco Ruiz and executed by Pilar Vazquez and Amelia Granados (1930), They inspired by a Persian tapestry preserved in the Cathedral.

OBSERVATIONS: San Isidoro is characterized by its sobriety penitential. The Lord of the Three Falls shape with a beautiful sculpture Cyrene and is carried in a splendid golden step.

HISTORICAL FACTS: It was founded by the Guild calls Coachmen big houses,  San Benito de la Calzada, this Brotherhood 1605, maintaining a distinctly industry association until the late eighteenth century. San Benito de la Calzada moved to San Roque where it was built by the union of coachmen large town houses.  Since 1668 It is in the Parish of San Isidoro. In 1920 Patroness of the Air Force appointing the Virgin of Loreto. In 1975, the brotherhood of penance joins the sacrament of San Isidoro.