NOVELTY
Home   >   Proclamation of the Holy Week in Seville 2014

Proclamation of the Holy Week in Seville 2014 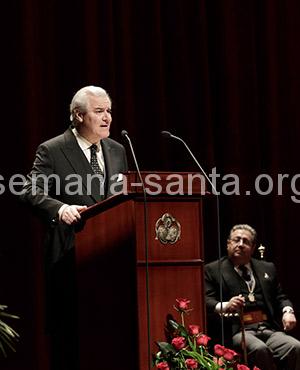 D. Francisco Berjano, It has been appointed by the Superior Board of the General Council of brotherhoods of Seville, gathered on Saturday 9 November 2013, Easter crier year 2014.

D. Sandblasting Berjano Francisco Seville, from 56 years, is Magistrate Judge of the Court of First Instance No. 11 of Sevilla. further, He is coordinator of the area of ​​procedural law of the master's Legal Cajasol, tutor of judicial school, regular contributor to several legal journals, and professor of the school of forensic legal practices ICIDE, and Bar.

At the preacher of the Holy Week in Seville 2014 the call of the Council is totally taken by surprise, as he stated at the press conference following their appointment, Manuel Jesus Rodriguez reports rechi. It was Francisco Berjano to the White Pigeon in the village of El Rocío, where the brotherhood of Vera Cruz had been on their annual pilgrimage to the Queen of the Marshes, when his cell phone rang with a call from the Council.

“My cry will have reference to the Church. I will explain the meaning of the cross for Christians and the brothers in general”, He said the crier, who feels uncomfortable with the designation “I feel uncomfortable and shocked with the appointment of crier”. He continued to express Berjano about his relationship with the opening speech of the Holy Week in Seville who lived first with his father “I went to my first proclamation of Easter in Seville Lope de Vega theater with my father to witness the opening speech he delivered the brother Ramon Martin Cartaya. I never thought I could be a preacher of the Holy Week in Seville”